Only a week to go until JordanCon!  The convention, dedicated to Robert Jordan and The Wheel of Time series, takes place April 20th through the 22nd in Atlanta, Georgia. I’m very excited to see many of the authors this year, including Aaron-Michael Hall, the award-winning author of The Rise of Nazil series. 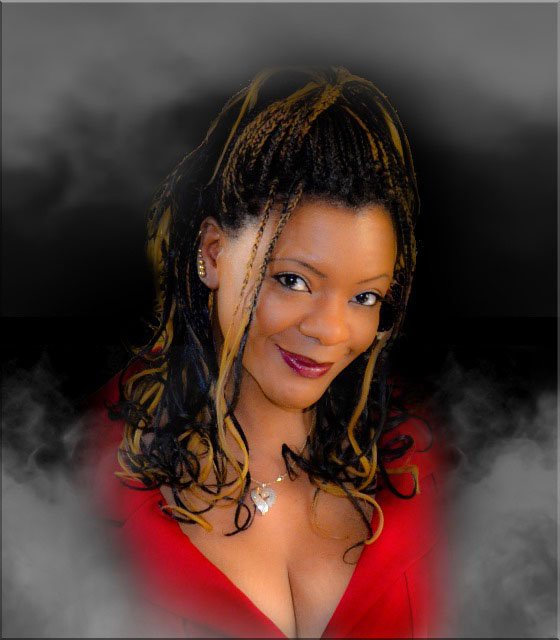 Only a week to go until JordanCon!  The convention, dedicated to Robert Jordan and The Wheel of Time series, takes place April 20th through the 22nd in Atlanta, Georgia. I’m very excited to see many of the authors this year, including Aaron-Michael Hall, the award-winning author of The Rise of Nazil series.

Q: Welcome Aaron-Michael! Your tag line says you are a writer of “diverse epic fantasy and science fantasy with an edge.” What does it mean to have an edge in your works and how do you incorporate it while writing?

Thank you for having me!

When I speak of an edge, it’s in reference to content that many would refer to as ‘dark fantasy’ or ‘grimdark.’ Although my epic fantasy series doesn’t fit in either of the aforementioned categories, those elements of darker fantasy are entrenched within the plot.

My Nazil series is intended for mature readers who aren’t nettled by some brutalities that are strictly used for characterization and integral to the plot. These grimmer aspects are interwoven into a richly detailed plot…they’re not used in place of the plot or to shock the reader.

Some of the harsher realities of Faélondul are grim, but the instances are few.

Q: You write your epic fantasy novels under Aaron-Michael Hall, and your science fantasy romance novels under Newland Moon.  Why do you feel it is important to keep these genres separate?

I felt that it is important to separate the genres due to the distinct differences in the novels. Although my writing style remains consistent, the depth and subject matter is disparate. For instance, when first published, The Rise of Nazil was 350k words. In comparison, Rites of Heirdron (book I of my science fantasy) is 70k words. I didn’t want my epic fantasy readers to expect the exact duplication in the differing genres. My science fantasy is compelling with the same multifaceted characterization that my readers love, but scaled to fit a shorter novel integrating a seamless merge of sci-fi and fantasy.

Q: Do you have a current project you’re working on that you’d like to tell us about?

Currently, I’m editing my second trilogy in the Nazil series, proofing the second novel in my Kurintor duology, and completing a new fantasy novel titled Tamesa that I’m co-authoring with Tom Fallwell. This will be Tom’s first year at JordanCon.

I wanted my newest release available for JordanCon this year. Kurintor Nyusi is a diverse high fantasy without my usual grimdark edge. It’ll be a great addition for fantasy fans and fits perfectly with JordanCon’s theme.

Q: For your epic fantasy series, you’ve created a whole language, called Mehlonii, and even had book trailers where this language is spoken. I think that’s incredible! Why did you develop this intricate part of your world and how big of a role does it take within the novels?

I’m asked that question often. J When I began writing the Nazil series, developing languages for the differing species and races was natural. I never asked: should I? Mehlonii (and a few other languages) developed along with the plot and characters. As the world grew, so did the divergent inhabitants and their languages.

On the Mehlonii page of my website, I also have the spoken dialogue from the novels organized by page number. When I updated The Rise of Nazil this year, I had to update the voice files, too. If anyone is curious about how Mehlonii sounds, they can visit my website: aaronmichaelhall.com/Mehlonii. I’ve enjoyed creating, writing, and speaking the language. Even my son knows a few key words.

The Mehlonii language isn’t overdone in the books. It’s in enhancement to the characters, cultures, and story. Mehlonii is an integral element bringing some of the fantastical back into epic fantasy.

Q: How much time/research/effort went into creating the Mehlonii language?

I’ve always loved languages and studied several in school. However, the prosodic, isochronal, lexical and regular stressors found in Amharic, Arabic, Latin, Hebrew, and Klingon (yes, Klingon) are favorites of mine. Some of the lexical stressors in Amharic, Arabic, and Klingon are similar in Mehlonii. It’s a melodious and prosodic (intonation, tone, stress, and rhythm) spoken language with some rougher stressors that are dependent upon phrasing.

Mehlonii is still evolving, and the dictionary continues to grow. I didn’t want to overcomplicate the language like some do. A language is supposed to make communication easier (and possible), not more difficult. The most simplistic language that I researched had merely 340 words. Taki Taki (also called Sranan) has an interesting origin and is a mix of several languages.

I listened to and researched hundreds of languages before developing more of my own. I knew how I wanted it to sound and what I needed it to do. In the end, it was more about my created cultures and how they appeared and sounded to me. At times, I’m writing and just speak a ‘word’ or phrase and something clicks. Then, I start googling after I’ve decided how to spell the word. It’s probably impossible to create something that doesn’t sound like anything else with the incalculable languages across the world. However, I endeavor to do just that, and I thoroughly enjoy the process.

Q: The world of Faélondul has many new species, including the Nazilians.  Can you explain a bit about what makes these species different?

One thing that I didn’t want to do was to have the same species and creatures found in most fantasies. I love elves, dragons, dwarfs, etc., I just don’t want to write about them. I introduce several different species and races throughout the series: Nazilians, Ohor, Syahndru, Z’brachieyn, Naidisians, Dessalonians, my lovable and formidable Desu Beasts, and a few others (You can see illustrations of some at my booths. I have commissioned a lot of artwork for my series).

The Nazilians are an intriguing and ordered species, guided by their deities and the Cha (priests) who speak for them. Their leader (the Zaxson), Draizeyn, is the ruler of Faélondul, and commands the formidable Chosen Guard. The Nazilian origin isn’t revealed until book II (Seed of Scorn), but the species is quite detailed in The Rise of Nazil.

Unlike the diverse human population, the Nazilians share like features: hair, eye, and skin color. Other than those distinct differences, they are much like humans. Howbeit, they are quite adept at reminding the humans of their place, which happens to be beneath them.

Q: Some of your works are featured as “convention exclusive” items.  Will you be showcasing any of these at JordanCon this year?

Yes. I have three items that are only available at conventions: the Mehlonii Dictionary (with graphics and maps), The Guardians’ Rise (a graphic introduction to the Nazil series, including a prelude with custom artwork, insights into the series, character profiles with pictures, stats, favorite quotes, and over forty commissioned character concepts from all of my series), and a Faélondul coloring book.

With the updates to the first trilogy, I’m updating the dictionary and The Guardians’ Rise as well. They might not be ready before the convention, but I always have coloring books available. Although it’s titled Faélondul, I have characters from my science fantasy and my newest epic included in the coloring book.

Q: What is it about JordanCon that made you want to be a guest author?

The atmosphere at JordanCon is amazing. Of all of the conventions I’ve attended, JordanCon is my favorite. It’s not only the varied and talented creatives. The staff, volunteers, and attendees are exceptional as well. JordanCon delivers in every area seamlessly and is the perfect family event for fantasy lovers and fans. I’ve been telling everyone that this is the event to attend in Atlanta. They’ve even begun reading Robert Jordan and Brandon Sanderson. It’s a win-win.

Q: Can you give us a sneak peek of which panels you’ll be on?

Absolutely! You can see me at the following panel discussions: Diversity in Brandon’s Works, Being Gratuitous, 3…2…1…Flash Fic!, possibly Urban Fantasy Hour, and Learn From My Mistakes (I signed up for this one, but I’m not certain if I was selected). I’d love to chat it up with everyone and have a great time! Of course, you can visit me at my vendor tables, too. I guarantee that you won’t be able to miss me. J

Q: Is there anything else you’d like readers to know about you or your works?

I’m really looking forward to meeting everyone this year. If you love epic fantasy with some fantastic characters doing amazing things (sometimes bad, too), come on over and have a chat with me. I create diverse novels with a host of characters and cultures. I’ll even have some sample chapters to give away, a few book giveaways, and I’m just fun to talk with! So, come on by and say hello. I won’t bite, unless I’m required to do so.

Also, I’ve updated my debut novel The Rise of Nazil. I’m bringing several extra copies if anyone who purchased it last year would like to trade with me. No strings. If you bring your book from last year, I’ll sign a new one for you. No charge. However, I have limited copies to give away. Those books are quite heavy.

Epic Fantasy authors Morgan Smith (Canada) and Tom Fallwell (Oklahoma) will be with me! It’s their first year attending, but it won’t be there last. Come by and chat with us!

Q: Thank you so much for talking with me Aaron-Michael!  I’m looking forward to hearing you talk about your novels.

Thank you for having me! I’m thrilled to have been included and can’t wait to meet you.

For more on Aaron-Michael Hall, you can check out her website, or follow her on her social media outlets: 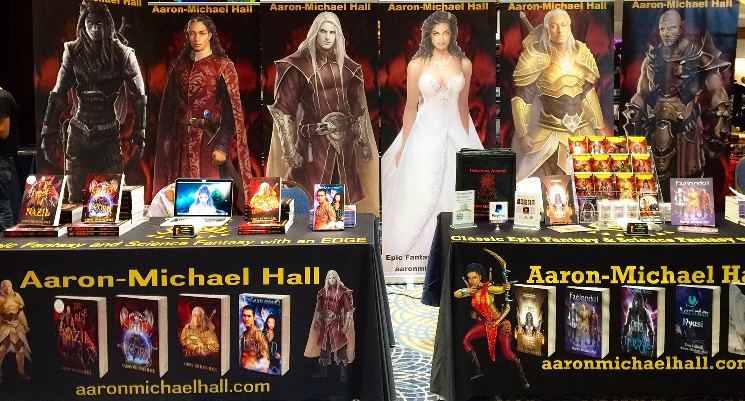