Rajiv's Threads In the Pattern: The Dad Also Rises

Conventional genre wisdom says that for the son to rise, the father must fall. But the Wheel has other plans. Rajiv Moté explores how Tam al'Thor was a dad with more to do than set his son on the path. He had an arc to complete that began long before he and his son saw a dark rider in the Westwood. (SPOILERS for The Wheel of Time and Bambi.) 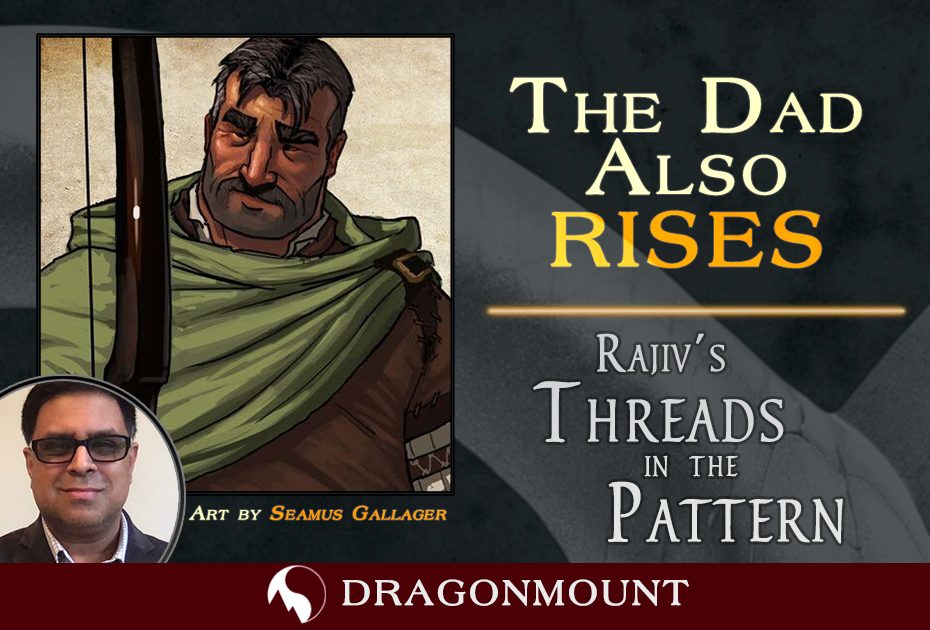 For the son to rise, the father must fall. From mythology to Marvel Comics, from Shakespeare to Star Wars, and in almost every Disney story, the parental figure must die before the heir can fulfill their role. The trope is so familiar that participants of Amazon Prime’s book club for new readers of The Eye of the World were sure that Tamlin al’Thor was a goner after Winternight, when Rand was torn between leaving with Moiraine for Tar Valon and staying to take care of his father. Narratively speaking, good parents are obstacles to children facing real danger. They prevent the story from getting started. Clearly, Tam should have gone the way of Uncle Owen and Aunt Beru, following convention.

Happily, Robert Jordan had a different story in mind. Tam al’Thor is no obstacle to his son. While the plot contrived to keep Tam and Rand separated until a pivotal encounter in The Gathering Storm, Tam had more interesting things to do than opening the farm gate for Rand by succumbing to his wounds.

I started reading The Wheel of Time in college, as a young man preparing to set out into the world to make something of himself. I read about Rand and Mat playing for their supper, surviving by their wits, and getting out of scrapes with a sense of romance. Everything was potential. What could be. The open road, man. When I finished reading The Wheel of Time, I was a dad. I started looking at Tam with the sense of association I once had for his son. Strong. Solid. Stable. A man whose job was to raise a hero, but had some heroics of his own left to do. Tam was the kind of dad I wanted to be. I’d become a supporting character in a story that belonged to my daughter, but my own story wasn’t yet done. The two facts were not at odds. Tam al’Thor embodied that truth.

Tam's “N-shaped” story arc has two volumes. The first, told through flashback and exposition, took him from the Two Rivers seeking adventure, and then back again with a wife and child. The second unfolded in the 14 books of the main series, taking him out of retirement and back into military life, as a warrior and leader of men. But still--most importantly--as a father.

Tam left the Two Rivers as a youth, and joined the army in Illian. He fought in the Whitecloak War, two wars against Tear, and the Aiel War, learning a blademaster’s skill under a mentor named Kimtin. He received a Power-wrought, heron-marked sword from King Mattin Steppaneos himself, and rose to the distinguished rank of Second Captain of the Illianer Companions. But the Aiel War was a turning point for Tam in his career.

“They came over the Dragonwall like a flood,” Tam said suddenly, in a strong, angry voice, “and washed the land with blood. How many died for Laman’s sin?”


The Eye of the World, Chapter 6, “The Westwood”

Tam understood that the political machinations of King Laman of Cairhien caused the Aiel to invade, and the bloodshed was prolonged by the nations slow in their arrogance to unite. In the war’s final battle, Tam sought escape from the heat of battle and stink of death on the slopes of Dragonmount, where the Wheel would have him find the newborn baby Rand. Tam was at the pinnacle of his career, but disillusionment, weariness, and fatherhood led him to quit the Companions and take his wife and child to the obscurity and pastoral life of the Two Rivers.

Back home, Tam became a man of secrets and silence. None but his wife knew the story of their son, nor did he talk much of his career. His heron-marked sword remained locked in a chest under the bed until a Winternight 19 years later, when the Trollocs attacked Emond’s Field. Teaching Rand the “flame and the void” exercise, rescuing him from the Trollocs, and giving him his sword would have been enough of an ending for most epic fantasy dads. But The Wheel of Time is vast, and can accommodate the rise of many characters, including a comeback for a veteren sword master who retired to raise his son.

When Tam recovered from his injuries at Winternight, he and Abell Cauthon journeyed to Tar Valon to find their sons, where they were stonewalled by the Aes Sedai. They returned to the Two Rivers to find that the Whitecloaks used the Trollocs as an excuse to occupy their land and abuse their people. Tam coordinated the underground resistance until Perrin Aybarra returned. Then, something remarkable happened. He ceded leadership to the younger man. (This does indeed seem a fantasy to Americans looking to choose new blood for leadership.) Tam not only stepped aside, but he remained a part of Perrin’s active resistance, training village men to be soldiers and lending experienced advice. Call it ta’veren, or call it character, but there was no power struggle, no internal conflict. Tam, a military man, knew when to lead and when to follow. Under Lord Perrin, Tam became the First Captain of the Two Rivers army, leading them to defeat the Shaido Aiel at the battle of Malden. Tam folded in and trained refugees, amassing a mighty Two Rivers army that fought in the Last Battle. Tam enters the Fourth Age the military leader of a large and powerful nation.

“But no, it was Tam. There was no mistaking the man’s kindly eyes. Though he was a head shorter than Rand, Tam had always seemed more solid than the world around him. His broad chest and steady legs could not be moved, not because he was strong--Rand had met many men of greater strength during his travels. Strength was fleeting. Tam was real. Certain and stable. Just looking at him brought comfort.”

The Gathering Storm, Chapter 47, “The One He Lost”

In DC Comics, Superman has the power of a demigod, but was raised by good parents with humble, Midwestern values. Superman’s moral upbringing makes him the incorruptible hero he is. Since leaving the Two Rivers, Rand al’Thor shouldered the weight of the world’s hope, as the Dark One sought to tear down that hope with tragedy and pain. Tam al’Thor’s most critical contribution came as Rand was nearly consumed by a darkness born of the need to be hard, at the expense of his humanity. Tam reminded Rand of who he was, and though he nearly died at his son’s hand in that confrontation, he triggered a crisis that reached down through the suspicion and hurt, allowing the good son underneath to climb out. When Rand returned from Dragonmount, he was healed, whole, and an avatar of the Light. He was the man who, remembering who he once was, could win the battle of wills against the Dark One.

On his return, when Rand introduced Min to Tam, it was not just the loving rite between a father and his adult son. It was a healing of the wound that had opened back in the Westwood, so long before, when Rand believed that he didn’t have a real father. He had one in every way that mattered. Tam did more than just set the hero on his journey. He kept him true.