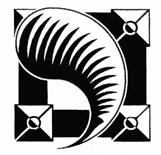 This symbol represents saidin and men who can channel. It has also come to represent the Shadow over time, most likely because of the Dark One's taint on saidin; often the Dragon's fang will be drawn on the doors of undesirables, a signal that evil resides within. Whitecloaks are known for inciting people to use this symbol against their neighbors. Likewise, the icon is used for chapters dealing with Darkfriends, and also for chapters dealing with men who can channel, including Rand.