The Wheel of Time Panel at New York Comic Con 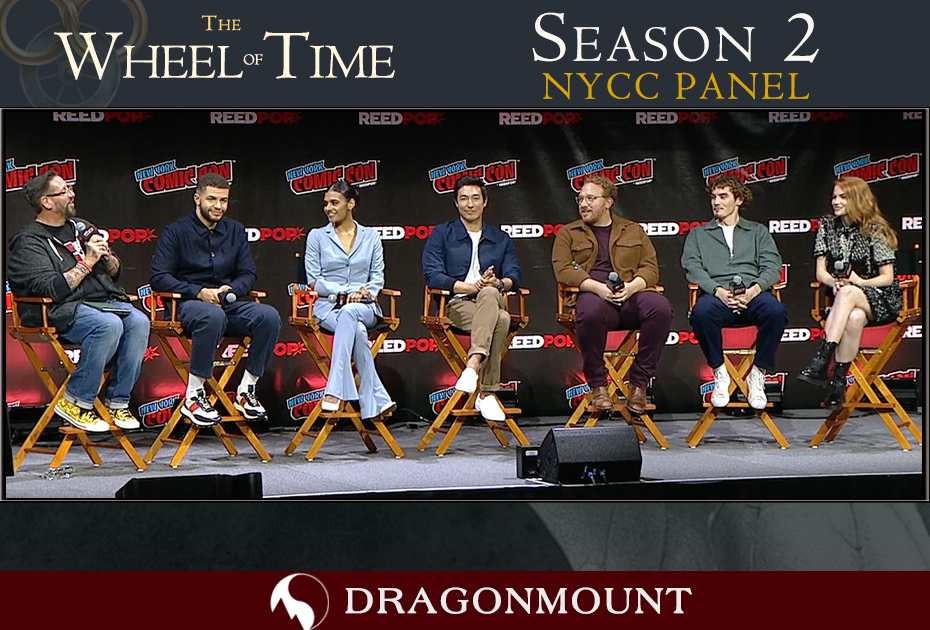 At the New York Comic Con today, Prime Video hosted a joint Wheel of Time and Lord of the Rings: The Rings of Power panel. The Wheel of Time started off first. It was streamed live on the popverse site, but to watch the full panel now that it's over you'll need a digital ticket. Just a warning, the clips were blocked so only those in the room could see them.

The panel began with a short introduction from Rosamund Pike, followed by some discussion of Perrin, Egwene, and Lan’s character arcs in season two. The clip from Rosamund was shared to instagram.

The next clip was the cold opening for Season one, Episode 7: The Blood Snow.

Then, they introduced Dónal Finn as Mat Cauthon. Dónal is taking over the character after actor Barney Harris left the show during filming of the first season. The clip was only shown to folks in the room, but The Wheel of Time social media channels posted a photo of Dónal as Mat.

We’re ready to toss the dice on this one. Dónal Finn is Mat Cauthon. #TheWheelOfTime #WoTNYCC pic.twitter.com/Dk5eLA0Y1h

Donal joined the group onstage to discuss his role as mat in season 2. Next they began to discuss a major new character - Elayne Trakand, Daughter Heir of Andor, played by Ceara Coveney. The group at the comic con were shown a clip of Elayne in the White Tower, and again The Wheel of Time social media accounts posted a photo of Ceara as Elayne in novice white.

The final clip was a sneak peek of season two. The Wheel of Time also posted it to YouTube, so check it out here:

There's a lot there for fans to dissect and discuss!

Finally they ended the panel with some audience questions. Stay tuned for our full breakdown of the panel! What did you guys think? Let us know in the comments below what you can't wait to see in Season Two.