Weekly Musings of an Insane Firebird: Interview with Verbal32 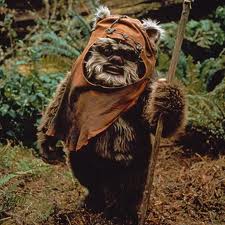 I have one of the Dragonmount Admins with me today. Verbal32, the Ewok of the Wheel of Time fandom, has taken some time out of his busy schedule to answer a few questions. For those of you who don't know, his schedule consists of grooming walking teddy bears, speaking gibberish, and worshiping golden robots. Verbal is the Social Groups Admin, so any and all questions about the Social Groups can be answered by him.

A: I was lurking in 2006 for a site that contained Wheel of Time info, and found Dragonmount. I lurked for a while and then joined. Almost a year and a half ago, Kivam PMed me and asked me if I was interested in becoming an Admin. I thought about it for a few days and then decided I'd go for it and blame whatever mistakes I made on Barm. Working as intended thus far.

Q: Can you tell people a little bit about yourself outside of Dragonmount?

A: My name is Steve, and I'm an accountant. God, that sounds like a bad intro at an AA meeting.... >_> I play a TON of ice hockey, and have done so since I was 3. I also play World of Warcraft. And I'm married with a 3-year-old son.

Q: Where did the Ewok joke come from?

A: Valentine's Day of 2008, lol. The Red Ajah hosted a ball in the White Tower & Warders Social Group, and everybody was "attending" with a pic in their post of what they were wearing. Basically, some light RP going on. After a while, I finally posted with a picture of Wicket from Star Wars--and from there, the Ewok references were born. I was always hanging out in the Blue Ajah, so they named me their official mascot.

Q: If you were in Randland, which faction would you prefer to be in?

Q: Outside of Dragonmount, are you active in any other parts of the Wheel of Time fandom?

A: No, but that's only because of having a kid. If I didn't, my ass would be showing up at every damn *Con out there! But, saving $$ for his college and not making my wife strangle me in my sleep take priority, heh. She's not a big fan of online fantasy communities...oh, well.

Q: Who is your favorite character in the series?

A: Moghedien. Always loved the Spider.

A: When Ingtar revealed and Rand gave him the blessing from the Borderlands. First time I ever got shivers up my spine from a book.

Q: Can you share a little bit about the Social Groups?

A: h8themall. Kidding, they are awesome. They function like little families, and people grow really close. Each has their own little quirks, which serve to make them unique compared to the others. Great groups, and great leaders. The best leaders are the ones that don't let Barm in their group. He can post there anyway, but we beat him regularly for that.

Q: Is there anything else you wish to share?