A Roll of the Dice: Crafts, Games, and Felicia...Oh My! 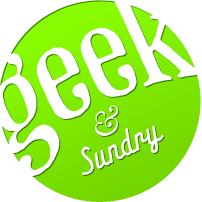 Greeting all! It is Thursday again meaning it is time for another installment of the Rotating Features blog! The dice have been been tossed and the featured topic has been chosen.

I now have a favorite YouTube channel, Geek and Sundry! Admittedly I knew about this channel when it was created, but never gave it a chance, even though my one of my personal crushes (Felicia Day) started the channel. None the less a good friend of mine got me hooked by sending me links to a show hosted by Wil Wheaton called Tabletop. I became hooked instantly. I love tabletop gaming and this show has it all. Everything from straight dice games like Zombie Dice, to cooperative role playing tabletop...and everything in between. The basics of this show is once a week, Wil Wheaton chooses a game and invites three to four friends, some of which are celebrities, to play the game. It is a great way to see new games in action and laugh at some people at the same time. This show also has AWESOME personalized trophies for the winners!

After watching almost all of the Tabletop episode I had to see what other shows I might like. This lead me to start watching Co-optitude. This is a show where Felicia Day plays video games with her brother Ryan Day. Each week they play a different console based game, mostly dated games, but they throw in a newer game from time to time. Most of the time, the games played are very odd, obscure games most people have never heard of, but the show is actually less about the actual games and more about the two people playing said games. The interaction between these siblings is hilarious! They may actually be the worst or best team mates I have ever seen. As an additional bonus, you really get to see how these two individuals actually are, as they do not hold back their personalities despite the cameras being on them. I honestly didn't think I would like this show, despite it having Felicia Day, when I heard of the concept, but the sincere and honest interactions make this a musty watch on my subscriptions! On a side note, me best friend told me in one of the Co-optitude episode Felicia Day makes a Wheel of Time reference, so if anyone can tell me which episode, they will be awarded cool points and a shout out in a future Rotating Features blog!

Lastly I began watching Craft Lab as well. This is a great short show where the main crafter and an assistant create a random geek culture characters and/or items out a random material. Seriously, they use a spinning wheel to determine both what they are making and the materials they will make it out of. Some of the most memorable for me were the Sonic the Hedgehog out of chicken bones, the Bat-Mobile out of deli meats, and Smaug out of plastic spoons. What I love the most about this show is the creative ingenuity to create awesome items out of crazy materials. In my opinion this is a must watch show for cosplayers as it helps you think outside of the box on potential items to use when making props to take your costuming to the next level.

I highly recommend the Geek and Sundry channel on YouTube.  As always I hope you enjoyed this installment of the Rotating Features blog. Sorry again for my recent absence. As always feel free to comment with your thoughts and any topics you would like covered in future Rotating Features blogs. Until next time, this is Azeryn signing off to prepare for my two hour run to support the Relay for Life. Don't know what the Relay for Life is? Google it!