TL;DR: The Starless Crown by James Rollins weaves together multiple storylines into a tapestry about family in all its forms, nature, and surviving foretold doom. The book's strength lies in its interest in humans' relationship with nature and is a good match for anyone looking for plot-heavy science fantasy.


Please note: This review contains very mild spoilers (first ~15% of the book). The spoilers are marked in the text and should be easy to skip. 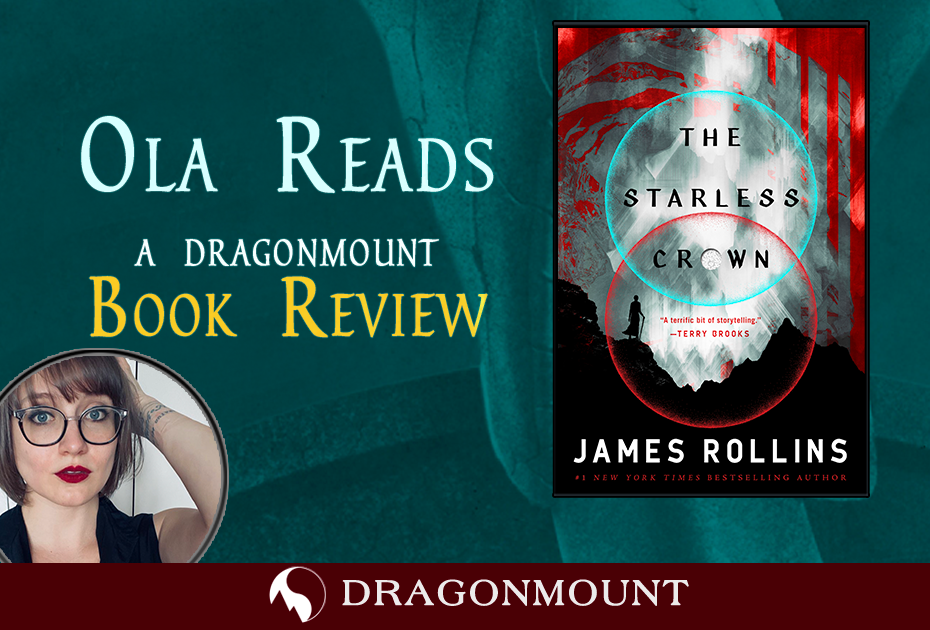 
TL;DR: The Starless Crown by James Rollins weaves together multiple storylines into a tapestry about family in all its forms, nature, and surviving foretold doom. The book's strength lies in its interest in humans' relationship with nature and is a good match for anyone looking for plot-heavy science fantasy.


Please note: This review contains very mild spoilers (first ~15% of the book). The spoilers are marked in the text and should be easy to skip. 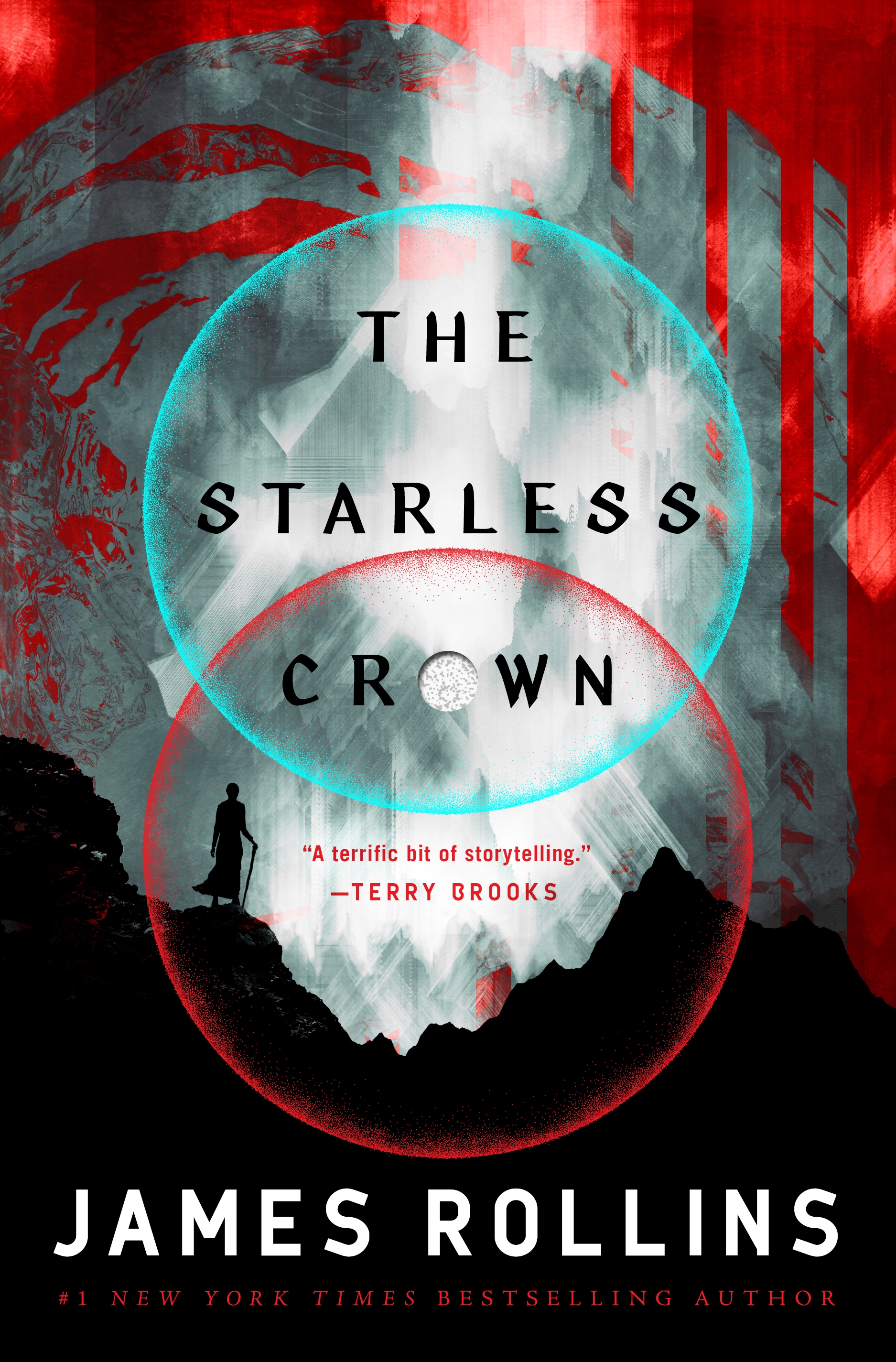 The Starless Crown by James Rollins is a long book by any count; clocking in at about 560 pages, it felt longer in the reading.


Part of this is the complexity of the tale. The author chooses four primary point-of-view characters: a young, blind student named Nyx; a thief who stumbles upon an alchemical secret while escaping the mines in which he has been imprisoned; a wayward prince living in the shadow of his older and evermore talented twin brother; and a knight who has broken his oaths. The author takes a page from Robert Jordan—whom he thanks in the acknowledgements—by adding in further, smaller POVs.


The pacing of the novel is as rapidfire as its shifts between narrators. I hadn't heard of the author before, but his publications seem to tend to the thriller genre, and this influence is clear. The story moves along with constant twists and turns; there is no situation that can't possibly get worse. There is death, violence, and betrayal; anything that can go wrong, will, especially in the case of our mainest main character, Nyx.


Because of the combination of points of view and breakneck pace, I found it difficult to root myself in the book and feel like I was a part of the world. The signposts of the worldbuilding were certainly interesting; the action takes place on a planet called Urth, whose denizens worship the Father Above (the Sun); the Mother Below (the Urth); and the Son and Daughter (the faces of the moon). One part of the Urth is eternally in shadow, the other eternally in light: as you may have guessed, the world is a tidally locked Earth—and, as we learn throughout the story, a planet that natural catastrophe is yet to truly strike.


The question of humans' ability to understand and control nature is central to the book. Most clearly, this appears as the central Big Bad of the book: convincing other humans that this natural disaster will come to pass—and all of the politicking that goes along with that—and then deciding how to act in the face of impending doom. However, throughout the novel, natural phenomena feature as impediments at least as frequently as other humans do. Animals have evolved into unfamiliar and often dangerous beasts; there are few scenes in the wilderness, and even among civilization, that don't feature an animal behaving in an unexpected way. Some characters have unusual and deeply special links with various creatures—and even of the protagonists that don't, we still see an overarching care for other living things: cognizance of never hunting more than their allotted share; pain at the suffering one's actions bring.


In spite of this theme, which intrigued me deeply, I found myself wanting more as I read. While the world had a lot of potential, I was ultimately left unsatisfied by how much is unchanged between our current society and this world's—not because I was looking for a utopia, but because it made the world feel incomplete. For example, young women are expected to be virgins to enter their Ninth Year at the Cloistery, but young men are not; the reason for this is unclear, aside from being a familiar callback to our own society's puritanical values.


In addition, certain fantasy tropes are also inserted into the story without due consideration, and often pulled me from immersion in the book. For example, a character named Pratik, who was imprisoned only to make another character's life more difficult, is described:

"...as if a shadow had been given form, a sculpture of polished ebonwood. ... He had been stripped naked, except for the collar of iron forged around his neck. His black skin, from buttock to shoulder, bore a map of white scars from the bite of whips. [... He] turned, revealing eyes of a mesmerizing violet—along with a feature unique to the Chaaen. Between his legs was nothing but a tuft of hair and a mutilation." (p.190)

A POC-coded character defined by the violence done to his body is suboptimal at best, even without the cliché of uniquely coloured eyes. Furthermore, the society from which this character comes is described as cruel and bloodthirsty, but the character's face is "placid, as if he had accepted such cruelties as part of life." His ‘goodness’ is signaled by this stoicism and further emphasized by Pratik’s response when a character accidentally causes a number of Pratik’s countrymen’s death: "Despite the tragic outcome, there was wisdom in your plan." (p. 193) This benign goodness flattens everything that Pratik could be and places him as one-dimensional support. At best, these descriptions and character choices are thoughtless regurgitation of antiquated tropes; at worst, it’s something far more harmful. I’m still not sure if the author’s use of the phrase “noble savagery” (p. 246) was ironic or oblivious or had some other intent. This uncertainty isn't comforting.

All told, it feels as if this book was written with an eye to diversity without wanting to engage in what diversity means. This goes beyond race and gender. It is somewhat rare, for example, to see disabled protagonists in fantasy; thus, I was really excited to follow Nyx's story. A seventh year student in her town's monastery, Nyx is visually impaired: though not fully blind, she has never seen more than the shadows of the world around her.


I was surprised—and not a little disappointed—to discover that she's miraculously cured early on in the book. While her healing reveals something for the larger plot, her disability felt a little like a dangled carrot that got quickly snatched away (I will note here: while I can’t see more than a foot in front of me without my glasses, I am not blind myself).

As an aside, her new sight also draws larger sociopolitical issues to mind without fully resolving them. For example, the head of the Cloistery where Nyx studies, Prioress Ghyle, is "darkly complexioned, her skin far darker than Nyx had imagined" (p.72) —yet there's nothing in the world of the book that suggests this might be surprising and why. It felt more like the author's hand drawing the reader's eye to racial representation in the book than a natural elucidation of social structures in the book's world.


Lastly, this book felt like it needed another editing pass. In some parts, the prose is purple and rhythmless, so focused on using a thesaurus for each word that the sentences lose their poetry; in others, it's jarringly direct ("She was shapely of form and generous of bosom", p. 336). Often, a word is repeated multiple times within a sentence or two. While these certainly aren't dealbreakers—and only came to mind in some parts of the book—readers who are particularly sensitive to language may want to come into this story with their loins girded.


Ultimately, this book did not rise to its promise on the jacket copy: this is not “a fantasy series unlike any attempted before.” It doesn’t feel like it’s tried covered much new ground at all. Still, there are images in the world building—the grandiosity of the structures; the overwhelmingness of nature—that will appeal to certain types of readers, especially those who want a lot of plot decorated with a lot of pretty things. It will be particularly enjoyable for those who love a good bit of wilderness in their stories.

The Starless Crown is available in the Dragonmount eBook store. Find it here!