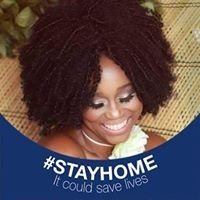 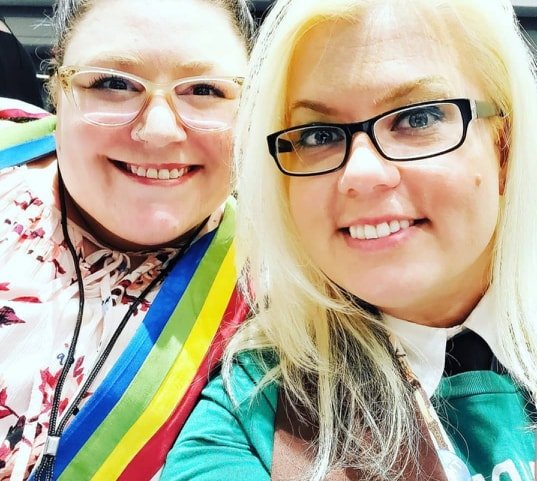 Wheel of Time podcasts have been popping up everywhere and one of my favorites is The White Tower: A Wheel of Time Podcast. The ladies of this podcast, Jenn Cobb and Jess Schutz, combine spoiler-free synopses of each chapter with real fan discussion and a large dose of humor.  This past week I had a chance to interview the ladies to learn more about them and their approach to The Wheel of Time and podcasting.

Ebony: Please introduce yourselves, how long you have been a fan of Wheel of Time, and your role in the world of the White Tower Podcast?

Jenn: I’m Jenn Sedai of the Brown Ajah, I’ve been Raised to the Shawl for 10 years now, sniff, and I enjoy the current role of Keeper of the Chronicles for the White Tower Podcast (smoothes skirt).
Jess: I’m Jess Sedai, of All Ajahs and of None (but Green to the core). I was raised to the shawl about 15 years ago, and I’m your Amyrlin Seat on the White Tower Podcast (crosses arms under breasts).

E: How long have you known each other?

Jenn: Since the day that I found Jess online last year in 2018, sometime in the summer I believe?
Jess: I looked it up (because of course I did). It was April 30, 2018, around 12:30 pm Central time. It was another full year before we actually met each other in person!

E: How did you two meet?

Jenn: Online. Jess had just finished A Memory of Light, and vented with the Wheel of Time hashtag on Twitter. I was not being a weirdo at work one day at all, and put in that hashtag in the search bar to see if there were any fellow fans out there that I could start a conversation with. Jess’s tweet about her anger at the series ending was the first thing that came up for me that day, by happenstance. Just saw her angry tweet and decided I’d go for it and respond with a, “Hey, I read Wheel of Time too, let’s talk about the ending!” And we just started a twitter comment chain.
Jess: Like Jenn said, I had just finished the series and was feeling a lot of feelings and so I screamed into the void of Twitter for a processing partner and like a glorious vision out of the ether she appeared, saying, and I quote, “Girl what part you on let’s dish”. At some point during our first exchange she also said, “Tai Shar MANETHEREN BIIIIIIIIIITCCCCHHHHHH”. Needless to say, I was won over immediately.

E: How many times have you read the series?

Jenn: I’m on my 2nd re-read now, so not many. However, there are several parts I have read LOTS of times.
Jess: I’ve read up to the middle of Book 9 twice (shut up Perrin). The rest I’ve only read once.

E: What made you decide to do a podcast?

Jenn: It was Jess’s idea, one of the many reasons why she’s Amyrlin. She had done a Philosophy podcast before, and a Lord of the Rings podcast before, so she was familiar with the recording and distribution across the internet. She had the setup and the resources ready to go. I had never even considered podcasting before she said, “Let’s do this,” and I was down.
Jess: I really like podcasting, and there was a podcast shaped whole in my heart at the time. And I love screaming at Jenn about WoT and whatever other garbage on Twitter and one day I was like, “I bet we’d have a blast if we did a podcast. Hey Jenn, should we do a podcast?” And to my surprise she was immediately like, “F--- yeah, how do we do it, let’s go.” This was before I knew that she’s down for pretty much whatever, whenever. ?

E: Your podcast is unique in the fact that it is spoiler-free though you have already read the series, do you find it difficult to discuss the books during the podcasts without spoilers?


Jenn: IT’S THE MOST DIFFICULT THING. EVER. Every once in a while, like when the casting announcements for the show came out or we do a special monthly Patreon only episode that’s spoilers out, we allow ourselves the beauty of just venting with spoilers out commentary. But Jess has a pre-recorded message at the top of those few shows we do air that have spoilers, that way our listeners that are following along chapter by chapter and don’t know what’s ahead have a clear understanding that the current week’s episode is going to be SPOILERS OUT, and we also have a written warning on the podcast description that week. I have personally spoiled one (1) thing in a recent podcast, but I made a judgement call to reveal a character that we were introduced to. I stand by it.
Jess: It can be REALLY difficult to keep certain things under our hats, especially because we’re essentially sitting down every week with a really good friend to talk about something that we love and we just want to HOLLER. I’ve had to edit stuff out on numerous occasions because we got to wildin’. But ultimately, I feel like it’s worth it because we’ve gotten lots of feedback from first time readers that they appreciate having a show they can listen to without worrying about ruining what’s coming up next. It really demonstrates that we (admittedly inadvertently) filled a need in the WoT content community, and that helps to keep us focused

E: When recording new episodes do you have an idea of what you are going to say or does the conversation flow more organically?

Jenn: This is a yes/no response, very typical for us Aes Sedai. We have one (1) absolutely verbatim script from both of us in each episode, and that’s half of our weekly show. The other half of the show is open floor discussion of the chapters we have summarized with that script, and it’s 100% ad lib. Jess and I don’t even discuss a general outline, or how we feel about the chapters we are going to be discussing before we crack the mic. We just talk until we feel we should delve into our chapter discussion, then just open fire debate afterwards about what we just read out loud.
Jess: Like Jenn said, our process is very free-form. We know what chapters we’re going to discuss, and we write up our synopses ahead of time to read. I’ll occasionally have thoughts I want to go into on the show, but the only real “structure” comes in the form of our two segments: Next Time on the White Tower Podcast, where we do a couple Onion-esque headlines about the next two chapters, and Our Ride or Die Character of the Week, where we talk about the character we thought kicked the most ass. But beyond THAT, we just do whatever. Honestly, there’s where the best Humor Nuggets come from and if we’re known for anything, it should be our Woke Feminism and Humor Nuggets.

Jenn: I only use the book.

Jess: I use the book, and I’ll bust out the WoT Companion or the Big White Book, or hit up Mister Google for reference during conversations while we’re recording. We’ll occasionally bring in points that other creators or readers have brought up that we think are interesting. If we remember to.

E: Do you re-read each chapter prior to the podcast?

Jenn: Yes.
Jess: I don’t remember what I just wrote, let alone what I read however many years ago. So definitely.

E: How often do you record episodes?

Jenn: Not as often as our weekly Wednesday airing deadline would demand! (Nervous laughter.) Because life? But usually weekly on Sunday nights, the recording is where it’s at. If we are doing a Patreon episode that month we’ll find time sometime in the middle of the week.
Jess: Sometimes we do really well sticking to our Sunday night record schedule! It’s important to me to make sure we’re reliably dropping at 8 am Central on WoT Wednesdays. That said, life happens so we get off schedule sometimes. And we’re still getting the hang of the Patreon exclusive content. We’ll get it eventually. Probably? (disorganized sweating intensifies)

E: Is there anyone in the fandom you like to interview?

Jenn: It’s funny cause when we started this thing, I stated on air that there are two things I wanted to do more than anything, and my long term goals were to 1. Host Daniel Greene, and 2. Panel at JordanCon. We’ve had the pleasure of hosting Daniel a few times, and we’ve paneled alongside him at JordanCon this past year. Hope to do more JordanCons in the future! Now though? We have a few ideas of who we’d like to nab, but I’m keeping them on the back burner for now.
Jess: I’m honestly terrible at giving interviews (Jenn is the one who never runs out of questions to ask, she’s brilliant), but if we’re talking pie-in-the-sky stuff, I’d love to talk to Rafe and Kelly Valentine Hendry about casting stuff some day, or talk to the cast members, especially the Emond’s Field Five, about how they feel about being a part of the next Age of this story. I think they’re as excited as we are, and it would just be really fun to talk about it.

E: If you could have one character on your show to interview who would it be and what one question would you ask them?

Jenn: I’d have Graendal on the show and ask why such a powerful, talented, intelligent, and beautiful lady had to use Compulsion on everyone in order to get things done, why that had to be her M.O. for all those years. Like, you already had the tools to get people to do things for you. It couldn’t be that hard. Like, you had to go FULL COMPULSION on EVERYONE, even your SERVANTS? Didn’t that get boring after so long? Wouldn’t you like the thrill of the chase every once in a while? Don’t you like a challenge? Why did you become so lazy? It’s too repetitive. You can always RESORT to Compulsion as a backup plan. It’s like aiming a cannonball at a mosquito when you’re already armed to the teeth with all the killing material you’ll ever need.
Jess: Ooof. That’s a tough one. Off the top of my head I’d like to ask Egwene why she married that walking trash can mess Gawyn. Girl, you don’t need a man. If you WANT one, you can get a better one. Lizzo wants more for you than this.

E: Are you excited about the Amazon Prime Series?

E: Once the series starts do you plan to follow it on your podcast or will you stick to the books?

Jenn: That’s something Jess and I have kicked around but don’t have a concrete answer to as of yet. We’re not sure yet. I know we WILL continue to do our chapter by chapter format, that ain’t changing, show or no show. We just don’t know how to incorporate the show too.
Jess: Yeah, we’ve got a couple ideas but the only thing we know for sure at this point is that the primary format of the show isn’t going to change. I think it’s safe to say that we’ll discuss it, though. Somehow.

You can join Jenn and Jess on Wednesdays at 8 am central at The White Tower: A Wheel of Time Podcast.  You should also follow them on Twitter and if you like what you hear you can support them at Patreon.