Wheel of Time Events This Summer 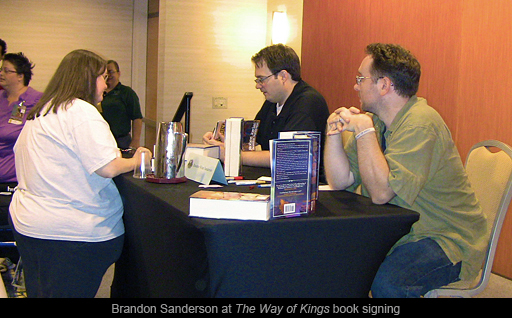 It's nearly summer in the northern hemisphere and that means convention season is well underway. Dragonmount would like to highlight some conventions and other fan events that will feature the Wheel of Time series. Of special note to European and Canadian fans, Sanderson plans to attend conventions in France, Norway, England and Toronto this summer. Keep in mind that all these events are subject to change. Items may be deleted or added to his itinerary. We'll do our best to keep you updated on changes, but you'll want to double check with the event organizers before making travel plans.

From May 26-29, Sanderson will be attending Les Imaginales in Épinal, France. You can view his schedule for the event on their website. Sanderson does not have an official signing scheduled, but will be happy to sign any book he wrote in between panels.

On June 1st, Sanderson will be signing at Outland Kirkegata in Oslo, Noway.

On June 4, Sanderson will have a signing at Forbidden Planet Megastore in London, England.

On June 10, Sanderson will have a signing in Paris, France. Details to come when we have them confirmed.

From June 11-13, Sanderson will attend Etonnants Voyageurs in Saint-Malo, France.

From July 15-17, Sanderson will be a guest at Polaris 25 in Toronto, Canada. In addition to Sanderson's signings and panels, it looks like they've got a good variety of fan panels on the Wheel of Time this year. You can see details on their website.

From August 17-21, Sanderson will be a programming participant at "Renovation", the 69th annual World Science Fiction Convention in Reno, Nevada. No word on schedules yet, but Wheel of Time fans Linda Taglieri and Jennifer Liang are also confirmed as program participants. Additionally, Sanderson has been nominated for a Hugo Award along with fellow authors Howard Tayler and Dan Wells for their podcast Writing Excuses in the category of "Best Related Work". Hugo voting is open to any member of last year's WorldCon (AussieCon IV) or members of this year's WorldCon registered by July 31st. For more information about the Hugos, check out Renovation's website.

September 2-5 will mark eleven years of Wheel of Time programming at Dragon*Con, one of the largest fan conventions in North America. Brandon Sanderson will NOT be attending this year, but Maria Simons, one of the continuity editors for the series will be participating as an Attending Professional. You can get the latest information about the Wheel of Time track on their website.

If you are interested in meeting Wheel of Time fans at these conventions, feel free to plan get togethers on our Meets and Conventions board. Some of these events already have planning threads started. And as always, if you'd like to file a convention or signing report to be featured on the site, please email jennifer@dragonmount.com for more information.