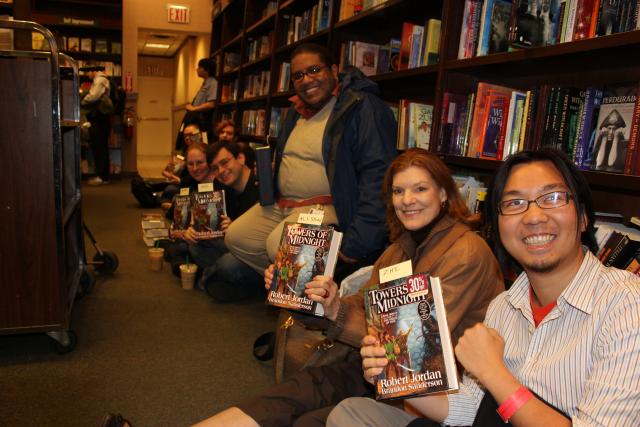 The last stop on the tour, the New York signing went a little differently from the others. For the Tower Guards, it began a few hours earlier, in the Tor offices! We met with Brandon, Harriet, Maria, Alan, Leigh Butler, Tom Doherty, and a few other people from Tor. Afterward, we were given a tour of the office.

From there, we made our way to the bookstore! Upon our arrival, there was already a pretty long line waiting for us, headed off by last year’s Storm Leaders. Luckily, we came prepared with trivia questions! We walked along the line in different places, randomly asking our questions and handing out prizes. Many fans were eager to answer- some even asked trivia questions of their own! So many Wheel of Time fans gathered in one spot is a great opportunity to theorize and have epic discussions with other fans, so we of course did that as well.

Since it was a Monday evening, not as many people dressed up as we would like. In fact, there were only two people in costume. We saw an Asha’man, and Mat among the fans throughout the night. Thanks, you two!

As the line was ushered into the small event room of this Barnes & Noble, we were surprised to see how much of the line made it into the room. While the event space was definitely small, the fans did a great job of heeding the Tower Guards directions, and the line moved fluidly. For those who arrived too late, they were able to watch the reading and the Q & A on televisions that were set up outside the room.

9mins 37secs). The part she read was Lan’s point of view, as he began his solo march into the Blight. Serious and heavy, Harriet painted a clear picture for us listeners. The tone was lightened by Lan’s thoughts of Nynaeve- those got a chuckle out of everyone, of course.

Following the reading was a Q & A session. We of course wrote that up, and you can find it here on Dragonmount. We filmed it as well, and you can view it on Youtube.

, , and . The 4th Age Podcast also covered the event, so I am sure you will be able to listen to that as well. There were some great questions asked, and many resulted in a R.A.F.O., of course. Unfortunately, Team Jordan did not have any of their famous R.A.F.O. cards left at this point in the tour, but Maria did wear her R.A.F.O. hat!

Among the fans in attendance were Brandon’s wife, Emily, several Tor employees, including Justin, Tom Doherty, Brandon’s editor, Leigh Butler, and author Charlaine Harris. Towers of Midnight is dedicated to the major sources of Wheel of Time fandom. As a representative of this massive fandom, and as someone the book was dedicated to, Leigh Butler was asked to sit at the table and sign books as well.

In addition to the official Q & A session, many fans asked questions as they approached the table to get their books

. We have documented those questions and answers also, and they can be found with the others. (Warning: These may contain slight spoilers for TGS and ToM). Some of the questions were fun, while others serious. All of them were given worthy answers!

While not everyone had a question for Brandon (at least one that wouldn’t get R.A.F.O.’d), I think almost every person thanked him for continuing the series and let him know what a wonderful job he has done. One group of fans even brought Team Jordan a cake!

Lurking near the table to write down the questions people asked, we also heard many stories and comments, of course. One fan showed up with a European version of the book. He had traded with a European friend so they could get a taste of the different versions. Another fan noted that he had come all the way from Brazil! The signing wasn’t his only purpose in the States, of course, but that is still quite a trip. A young woman came bearing Warbreaker and explained that it was purchased on her honeymoon, and when she got home she realized it was the only souvenir she had gotten. We heard a lot of compliments on all of Brandon’s work- especially Way of Kings. Everyone who has read it seems to love it!

Several people let Brandon know how much they love and appreciate his Twitter updates, and of course there were a few fans that showed their appreciation by presenting him with Magic: The Gathering cards! In an interesting twist, he had his fans sign the cards they gave him so he will be able to remember where he got them! Among the books to be signed was someone’s Kindle! That’s right, Brandon & Harriet signed someone’s Kindle. Starr Goozee, another fan, gave Brandon some gorgeous environmental photos she had taken. They really were magnificent, and you can see photos of them <a href=’http://www.dragonmount.com/forums/uploads/1289351488/gallery_15164_51_509155.jpg’> here</a>. Emily Sanderson, Brandon’s wife, sat beside him during part of the signing, and a bunch of fans thanked her and shook her hand.

Throughout the night, Tower Guards did their best to entertain the masses with more trivia and prizes. A poster sized version of the Towers of Midnight cover art was raffled off, and won by Ali Weisz, who enthusiastically got it signed by everyone.

While this particular Barnes & Noble was not the most accommodating of places, the night was definitely a success. As tired as we felt afterward, I don’t think any of us could begin to imagine how tired Brandon and Harriet must be after that tour. We appreciate all the work that goes into The Wheel of Time, from Brandon & Harriet, Maria & Alan, to Tor’s employees and the huge fandom. The overall feel was of the night was excitement and appreciation, and we Tower Guards have already made plans with the Storm Leaders to come back next year so we can experience it all over again (and let someone else keep everyone in line)!

Thank you to everyone who helped make this event as amazing and fun as it was. Special thanks to Tower Guard Zeshan Hamdani, who spent a great deal of time on all of the filming and photography. You can find the rest of his photos in <a href=’http://www.dragonmount.com/forums/gallery/album/15164/51-nyc-tom-book-signing-110810/’>Dragonmount’s gallery.</a> If you had your picture taken, this is where you will find it!

Editor's Note: The Tower Guard also conducted a short interview with Brandon at the signing. It contains spoilers for TOWERS OF MIDNIGHT, so it's posted on our spoiler discussion forum.