JordanCon 2019: A Talk with the Toastmaster

Ebony talks with long-time JordanCon attendee, artist, and Dealer Hall Director Paul Bielaczyc, who will be the Toastmaster at JordanCon 11: The Shai'Con. 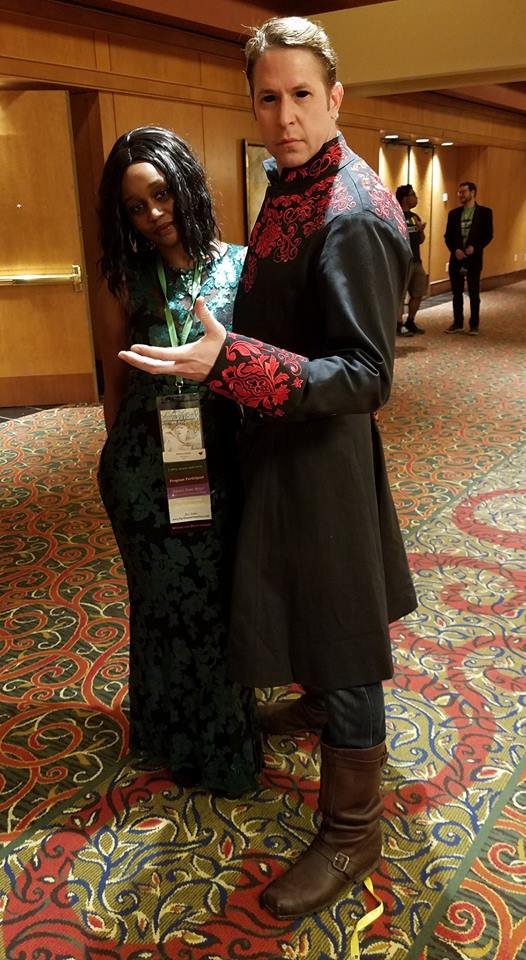 You may know him as the guy with that excellent Rand al’Thor cosplay, but his name is Paul Bielaczyc and he is a JordanCon staple.  I got a chance to talk to Paul about JordanCon, being toastmaster, and his love of The Wheel of Time.

Ebony: First things, first: When did you start reading Wheel of Time?

Paul: I first picked it up my senior year of high school, and stopped reading at what I like to refer to as "The Hump." I feel like most people read a few chapters of a new book to see if they are hooked, and for Wheel of Time, that magical point is the end of Chapter 4. I know I got to that point, put the book down, and then life happened. And I know that speaking to many readers who tried reading the series, they got to the same point (I now tell people to go back and cross "The Hump").


I picked it up again the summer after my freshman year of college after seeing a display at the student bookstore for the release of The Path of Daggers. Another student pointed out how excited he was to read the next book in the series, and he encouraged me to pick it back up. So summer of 1999 is when I devoured the first 7 books of The Wheel of Time.

By the way, quitting at Chapter 4 stinks. Chapter 5 is nuts!! And the story doesn't really let up at all after that.

(Editor note: I actually did the same thing)

Ebony: What made you decide to cosplay as our favorite moody Ta'veren?

Paul: In Grad school I thought it would be cool to dress up as Rand al'Thor for Halloween. Not a single person knew who I was.

Many years later, I was apprenticing with an artist out in Kirby, WY, population 57. A young lady who modeled for the artist asked to see my art, which lead to showing off pictures of my costumes. When I clicked on the folder for that Halloween, the young lady was shocked. She looked up at me and said, "I know you! You're Rand al'Thor." I didn't follow.

She then pulled up Google Images, and when she searched for "Rand al'Thor," there I was, 6 out of the first 10 images on Google Search. She told me that The Wheel of Time was her favorite book series, and when she did a book report earlier that year, she used photos of me in her report.

A few years after that, I was working at my Artist table at Dragon*Con, when a young man walked by dressed as an Aiel. When I complimented his awesome WoT cosplay, he turned to me, bowed deeply, and said, "Thank you, Car'a'carn." There I am, not in costume, but simply dressed in jeans and a t-shirt. I looked at him confused. To which he replied, "Your cosplay of Rand al'Thor is all over the internet. When I read the books, I picture you whenever Rand is brought up. You *are* The Dragon Reborn."

And that was the moment. I had to be the Lord Dragon.

And funny enough, many more years after that, when signing my copy of Memory of Light, a certain author by the name of Brandon Sanderson asked me, "I make this out to Rand, right?"

E: Do you do any other character cosplay?

P: Within The Wheel of Time, the only other cosplay that I have done is a Trolloc. Well, I also did a Grayman in year 3, and Moridin/"Just Rand" a few years ago, but nothing as impressive as the Trolloc.


Outside of that, the list is pretty insane. Ash Williams from Army of Darkness, Leon Kennedy from Resident Evil 4, Waldo, Link from all the Zeldas, a realistic Ice King from Adventure Time, CLU from Tron Legacy, Ander Elessedil from MTV's The Chronicles of Shannara, and probably a bunch of throw-away costumes that I wore once.

E: When did you first attend JordanCon?

E: Aside from being the resident Lord Dragon, what other roles do you play at JordanCon?

P: My first year I was a simple sheepherder... I mean vendor. I then played some music on Saturday night, and I become the resident DJ for the Saturday Dance Party. I am also a Co-Director for the Art Show with April Moore, and the Dealer's Hall Director as well. Phew.

E: Did you get to have any say in the theme for JordanCon 2019 or did Jennifer Liang (JordanCon Director) and Aubree Pham (JordanCon 2018’s Toastmaster) just tell you what to do?

P: I did not. I was just as excited as everyone else when they announced it during Closing Ceremonies.


I'm sure that once the theme was settled on Shai'Con for 2019, those in charge figured that since I have been embracing The Dark Lord Dragon for the past 2 years, that it would be a good fit. And all I can say is, "Indeed."

E: What was your reaction to being asked to be Toastmaster for JordanCon 2019?

P: JordanCon has become family to me, and I wouldn't be a licensed Wheel of Time artist without JordanCon or Ta'veren Tees. So when they ask for my help, I'm usually ready to assist. And I'm pretty extroverted (if you didn't know).


The best moment though was while I already agreed to be Toastmaster when the announcement was made at Closing Ceremonies in 2018, I didn't know the theme. When they announced that, well, my darker side was very, very pleased. Oh crap, I guess that's another character cosplay I forgot to mention. But everyone will see that costume in 2019.

E: What can we expect from you as toastmaster?


P: Having someone bleep me constantly with the word "hot dog?" Thankfully Patrick Minze is really good at that.


I'm kidding. (Editor’s note: He is not kidding) I am hoping to have a few fun surprises for Opening Ceremonies, and otherwise be entertaining while informative. There is a happy balance of making sure that actual information is conveyed to the attendees (how Art Show or Charity bidding works, Weapons policy, etc.) while still making it fun and memorable.


I am asking people to come up with fun, twisted versions of their favorite characters, similar to my Dark Lord Dragon, to embrace the theme. Portal Stones exist in the series, and definitely are the windows to alternate universes. I really want to see how crazy and fun people can make their favorite characters this year. This year's theme, crossed with the idea of the Portal Stones, really allows for level of creativity and originality that I don't think we've seen in the first 10 years.

So obviously, as The Lord of Chaos and The Shai'aman, one can expect a little breaking of the Wheel and Pattern. That goes without saying really.

And next year is also the culmination of the Black Ajah mystery that has been going on now for 3 years. As a participant myself, I have no idea what is going on, other than to say that I'm sorry if actively encouraging people to be Darkest Timeline versions of themselves throws off the balance of the game.

But there definitely will be specialized badge ribbons for anyone that joins Team Shadow for 2019 (we can celebrate the Light in 2020).

E: What is your favorite JordanCon memory?

P: Man, that is a hard question to answer.

I think one of my favorite moments was the year when TWoTcast were the Toastmasters. Chip Moore and I came up with an idea for Opening Ceremonies a few weeks before the convention, and so spent multiple nights in my driveway working in the dark. But we thought recreating the climax to Lord of Chaos would be too much fun to pass up.

We built a man-sized chest out of insulation foam, and then carefully cut it apart, and pieced it together using just toothpicks. Chip (and a team of Red Ajah) dragged the over-sized chest out from backstage. And then, on cue, I burst out of the chest in full Rand Al'Thor get-up.

Of course, the speech I gave during the Costume Contest when I was dressed as "Just Rand" was really poignant and much more serious than most people expected from me. But then on the flip-side, the entire Rand on the Run Facebook Adventure.

E: What do you do for actual money? What is your "day job"?

P: So my day job is pretty unusual, or at least, was more unusual back when we started in 2002. Nowadays kids make a living posting the pictures to the Instagrams, so I guess our business isn't all that strange with how popular Cosplay has become. So my brother, sister, and I co-own Aradani Studios, which is known all over the world primarily for making prosthetic elf ears which are hand-painted to match your skintone. We do a variety of other prosthetics, horns, noses, and masks, but elf ears are what we are known for. My brother and I are both fantasy artists as well, my brother working in oils, acrylics, and digital painting, and I work primarily in charcoal, graphite, and pastel. We have both won awards across the country over our 16+ years in this career, and in 2006 I won the prestigious Chesley Award for my piece, Nightmare. And of course I am one of the 6 current licensed Wheel of Time artists. Thankfully, everywhere we sell our ears, we sell our artwork. But when someone asks how I pay my mortgage every month, it is definitely because of those ears.

Thanks to Paul for joining me. I am sure you can tell JordanCon will never be the same once Dark Lord Rand al’Thor is done with it. And we wouldn’t have it any other way.

JordanCon tickets are currently $50 for the full three days.  The price goes up to $55 January 1, 2019.  Check out JordanCon’s website for more information.