Rajiv's Threads In the Pattern: Homecoming

For J.R.R. Tolkien, “home” is the beginning, end, and the stakes. But Robert Jordan agrees with Thomas Wolfe: you can never go home again. (Minor book SPOILERS for the Emond’s Field Five, and their relationship to home.) 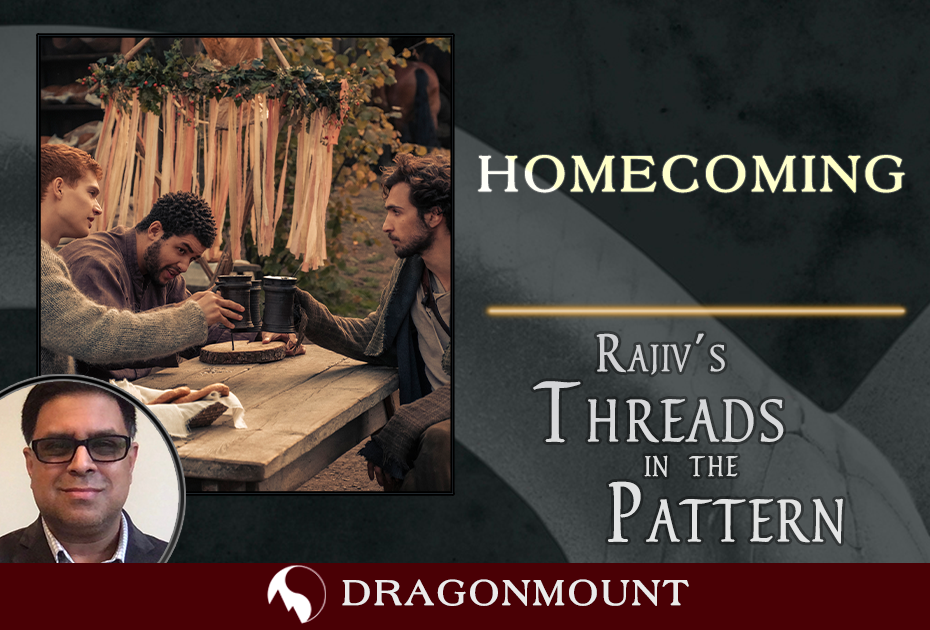 Early in the Covid-19 pandemic, the editor of The Magazine of Fantasy and Science Fiction C.C. Finlay noted that the stories submitted to his magazine had shifted away from the common themes of finding or returning home. He reasoned that writers were getting cabin fever, and the idea of “home” had lost its romance during the extended lockdown. (Finlay also noted that loneliness had become more of a thematic motivation in the stories he received, and more stories were culminating in a kiss.)


It’s an interesting shift for fantasy fiction. For those of us whose introduction to epic fantasy was J.R.R. Tolkien, “home” has a powerful resonance in the genre. “There and back again” is almost a structural expectation for a story. In Tolkien’s world (and in Joseph Campbell’s Hero’s Journey), “home” is the beginning and end of the adventure. Preserving home forms the ultimate, most personal stakes, and the return illustrates how much the protagonists have grown. “The Scouring of the Shire” is perhaps the truest of the many endings of The Return of the King. It shows that, for the Hobbits, the War of the Ring was basically preparation for the battle for the once and future pastoral paradise of the Shire.


When I read and reread The Wheel of Time, I often think of the New York Times blurb about the series.

“Mr. Jordan has come to dominate the world Tolkien began to reveal.”


I like that quotation for the comparison, but I think it misses the mark. The Wheel of Time isn’t an extension of The Lord of the Rings, even a spiritual one, but it is certainly in conversation with it. Robert Jordan’s Emond’s Field was a pastoral paradise just like Tolkien’s Shire, but Jordan used it to say very different things about “home.” Where British Tolkien, writing in an era of waning empire, saw the War of the Ring (and the Scouring of the Shire) as a restoration of old glory and monarchical status quo, American Jordan, writing at the cusp of a new millennium, saw the end of the Third Age as a time of technological progress, cultural intermixing, and unpredictable change, for good and ill. In The Wheel of Time, you can never go home.


Even in his pre-Wheel swords and sorcery novel, Warrior of the Altaii, Robert Jordan was interested in themes of a rapidly changing world, where people needed to adapt or go extinct. There is no going back to past glory, there is only going forward into something new. In The Eye of the World, Emond’s Field is portrayed as cozy and idyllic, and the young protagonists (except Egwene) leave it with reluctance. But where The Lord of the Rings was a story about going off to war to protect one’s home, The Wheel of Time is a bildungsroman, forging maturity and power from youth and innocence. “Home” is the nest that the fledglings must leave. Most make a place for themselves in the larger world. Of the Emond’s Field Five, only Perrin returns. His chapters, reminiscent of “The Scouring of the Shire,” are not about restoring home to its old status quo, it’s about transforming it into something suited to the times. After evicting the Whitecloaks and eradicating the Trollocs, Perrin musters the Two Rivers and leads them to war. The beard Perrin grows is the not-so-subtle symbol of him becoming a man.


Egwene does briefly return home in the World of Dreams, looking for a place of safety, and even in that reflection of Emond’s Field she sees that it is changing.

“[Egwene] was reluctant to leave, though. Home. Emond’s Field. The last place that she had really felt safe. More than a year and a half had passed since she last saw it, yet everything seemed as she remembered. Not quite everything. On the Green stood two tall poles with large banners, one a red eagle, the other an equally red wolf’s head. Had Perrin anything to do with those?”
-- “Dreams of Galad,” The Fires of Heaven


The Two Rivers is on its way to transforming from a forgotten district of Andor to a nation of its own, with banners, an army, a manor house, and a lord.


For all the moral starkness in Robert Jordan’s cosmology, change is not a fork in the road, with one path leading into darkness, and the other into light. Change is chaos, everything moving at once, with three unintended consequences for every intended one. But as a world view, it means that there will always be new opportunities for growth and wonder. As a story, it means the tale is never over. There is always another adventure beyond the final page, something more to discover. On this, Jordan and Tolkien agree: the road goes ever on.