Rajiv's Threads In the Pattern: Cults of Personality

If Robert Jordan’s depiction of the political landscape of the apocalypse in The Wheel of Time seems prophetic, it’s because he was a student of history. SPOILERS for all the books. 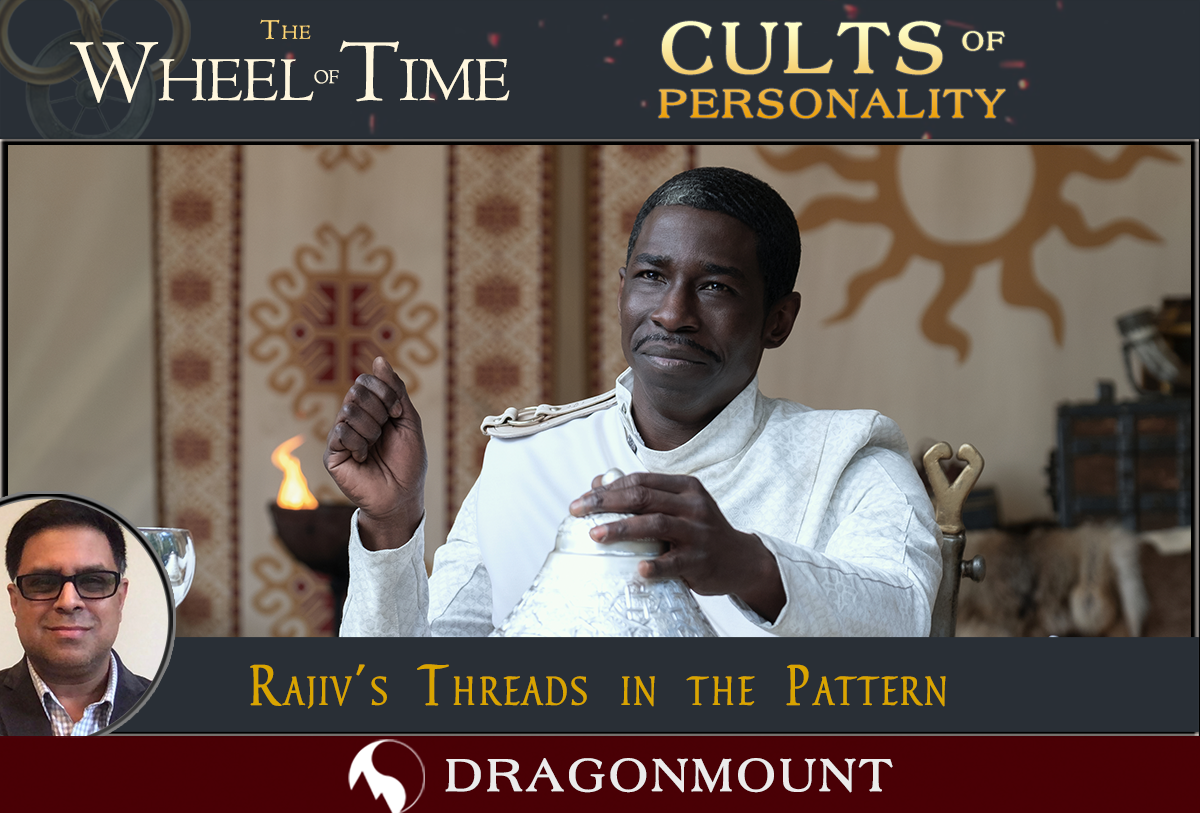 J.R.R. Tolkien said “all stories are ultimately about the fall,” and Robert Jordan’s The Wheel of Time certainly fits that description. There are neither beginnings nor endings to the turning of the Wheel of Time, but much like the Hindu cosmology on which the Wheel’s cyclical history is based, there is an Age that represents the apex of human civilization (the Age of Legends), and an Age that falls into the nadir, where the Dark One casts his shadow on the world. Apocalyptic stories chronicle the fall. The stakes are whether there is hope of a subsequent rise.

“Savior syndrome and cults flourish during the unstable period before autocratic consolidation. People are so frightened, they don’t know who to trust. They want to follow. They don’t want to think.”

While Robert Jordan’s take on the fall of civilization centered around the rise of an evil Dark Lord, it manifested in recognizably political ways. Our own world history shows war and strife following the rise of cults of personality around authoritarian leaders, fanning the flames of a society’s worst impulses. In the story, the road to Tarmon Gai’don was filled with such cults and despots, many of them familiar. Let’s look at a few.

The Children of the Light

The Children (or Whitecloaks as they’re called when not in earshot) are a military organization answerable to no authority but themselves. Though based in the nation of Amadicia, their Lord Captain Commander holds more power than the Amadician king, and they boast that their authority extends wherever the Light shines. Robert Jordan claimed that religion didn’t exist in his world, because the Creator and the Dark One were evident to all, but the Children are religious zealots, complete with a holy text, The Way of the Light, and an inquisitorial body, the Hand of the Light (or Questioners).

We don’t know much about the group’s founder, Lothair Mantelar, but he wrote The Way of the Light and organized the Children during the War of the Hundred Years. It was a brutal, bloody period of chaos following the disintegration of Artur Hawkwing’s empire. During such eras, charismatic leaders offering certainty, purpose, a banner, and an enemy tend to flourish. The Children’s enemies were Darkfriends, but Mantelar also had a useful target in the Aes Sedai. During Hawkwing’s final years (and possibly under Ishamael’s influence), the High King waged war against the White Tower, and his distrust of Aes Sedai was so great he even tried to build a capital around an Ogier stedding, where the One Power could not be used. Given the Dark One’s taint on saidin and Hawkwing’s hatred of Aes Sedai, it would have been easy for Mantelar to harness historical and legendary animosity toward those who wielded the One Power.

The glass columns of Rhuidean revealed the willingness to scapegoat and lynch suspected Darkfriends even before the Breaking of the World. The attitude carried forward through centuries, and is reminiscent of the Whitecloak ways.

The townsman spat at him. “The Forsaken are dead. Dead, do you hear? Lanfear will not protect you anymore. We will root out all of you who served the Forsaken while pretending to be on our side, and treat the lot of you as we treated that crazy old man.”

… Something made Coumin look up. Charn’s white-haired body hung from a rope pulled over the ridgepole, one foot bare where he had kicked his boot off, the fingers of one hand caught at his neck where he had tried to pull the rope free.

-- “The Dedicated,” The Shadow Rising

While their name translates to “Servant to All” (“public servant?”), the Aes Sedai were a rarified class who lived centuries longer than ordinary people and, of course, could wield the magic power that drove the universe. What we know of the Age of Legends reinforces the idea that they were elites whose status was conferred by an inborn trait, the ability to touch the One Power. The White Tower was founded after the Breaking of the World, during a time of great strife. The Aes Sedai themselves became an even more exclusive group, as all the male Aes Sedai were driven mad by the Dark One’s taint.

Since its founding, the White Tower’s mission has been to spread its influence and consolidate its authority. Each Aes Sedai is treated in most nations with the status of a ruler, and the Tower’s premier, the Amyrlin Seat, has been known to command kings and queens. The Tower reinforces its authority by suppressing its failures. Moiraine won Lan’s trust by revealing one of the Tower’s secrets.

The answer he wanted was Sealed to the Tower, taught to Accepted in history lessons yet forbidden to any except initiates of the Tower. … “Over a hundred sisters were ordered to Malkier,” she said more calmly than she felt. … “Even Aes Sedai cannot fly, however. They were too late.” … “That was before I was born, but I regret it deeply. And I regret that the Tower decided to keep their effort secret.” Better that the Tower be thought to have done nothing than to have it known Aes Sedai had tried and failed. Failure was a blow to stature, and mystery an armor the Tower needed.

Into this atmosphere of elitism, arrogance, and secrecy comes the Dragon Reborn. When the Amyrlin Seat Siuan Sanche’s secret dealings with the Dragon Reborn were revealed, a faction of Aes Sedai led by Elaida do Avriny a’Roihan staged a coup and deposed Siuan. Elaida was strong in the One Power among Aes Sedai, which conferred standing. She was also steel-hard, determined, and sporadically possessed of the ability to Foretell the future, if not necessarily understand it, which gave her a disastrous false certainty. She was also almost laughably narcissistic. (I have since been disabused of the notion that someone so self-preoccupied could never achieve such a position of power in the real world.)

Mesaana and the Black Ajah couldn’t have picked a better leader to tear the White Tower apart. Elaida reigned through intimidation, threats, and bullying. She seemed incapable of building consensus or coalitions except through appeals to fear or greed. And she devoted a great deal of time and resources to self-aggrandizement, like building a personal palace to rival the White Tower itself. Elaida’s coup broke the Tower into its first open schism that became an all-out civil war.

In the context of current events, Robert Jordan’s take on the White Tower’s schism may have been optimistic. While Elaida’s unhinged leadership, and coterie of cronies and secret Darkfriends caused significant damage, Jordan showed that the institution of the Hall of the Tower, as well as backchannel activities of serious-minded Aes Sedai acting for the good of the Tower (and the world), were capable of healing the break. Egwene was instrumental in bringing the White Tower to Tarmon Gai’don on the side of the Light, but she did not act alone.

If the Children of the Light brought elements of quasi-religious fundamentalism to the world of the Wheel, the Dragonsworn brought full-on, militant, religious extremism. It’s fitting. Rand al’Thor is a figure of religious prophecy, a messianic avatar of the Creator sent to save the world from humanity’s great adversary, the Dark One. The crumbling of nations was foretold; the Dragon’s appearance signaled the End Times, a new global purpose, and an open, literal war between Light and Dark. And in this cosmology, it’s absolutely, beyond-any-doubt true.

When Masema Dagar, a soldier who has guarded against the Blight all his life, saw Rand al’Thor in the sky, battling what appeared to be the Dark One, it was a religious experience that filled him with awe and zeal of purpose. In this world, that is a reasonable reaction to the arrival of the actual messiah. But as the Prophet, Masema amassed madmen around him, and became a crazed fanatic. How much of that was due to the disguised Forsaken (probably the proxy-loving Demandred) manipulating him? It’s unknown. Some people are just fanatics in search of a focus.

What’s interesting is that the Prophet, much like the Children of the Light’s Lothair Mantelar, invented his own moral code to rally his followers. For the Dragonsworn, extreme austerity, a detachment from worldly concerns, and devotion to nothing but the Dragon Reborn were the hallmarks of their beliefs. None of this came from Rand al’Thor. It became critical to his victory that Rand wasn’t the sort to dictate what was in people’s hearts, but as a religious figure, his refusal to do so created a moral vacuum for those who saw all old ties and purpose burned by the coming of the Dragon. That allowed others--Masema and the Forsaken manipulating him--to fill that void in a way that served the Shadow.

Just as the White Tower was sundered by news of the Dragon’s rebirth, the Aiel suffered an identity crisis when Rand proved himself their Car’a’carn by revealing their secret history. Even today, in the real world, people fight bitterly over the history they reveal about their own society. Identity is the stories we tell ourselves about ourselves, and to learn that identity is a lie invites a crisis.

When Rand revealed that the Aiel, proud, honor-bound warriors, began as sworn pacifists whose honor was to serve, he revealed that every one of them was one of the worst things an Aiel could be: an oathbreaker. The Tuatha’an, whom they called “lost,” were actually the keepers of the true faith. Some of the Aiel killed themselves to expiate their shame. Some permanently became gai’shain, a temporary status that contained an echo of what the Aiel once were. The Shaido Aiel doubled down on the lie of their identity, rejecting the revelations about their history as falsehoods designed to break them. Their clan chief Couladin claimed to be the Car’a’carn who would lead the Aiel to glory, a lie that many of his people would want to believe over the shame that Rand offered. Couladin offered to Make the Aiel Great Again.

“I am not afraid!” Couladin shouted. “No man can call me afraid! I, too, saw with my ancestors’ eyes! I saw our coming to the Three-fold Land! I saw our glory! The glory I will bring back to us!”

“I saw the Age of Legends,” Rand announced, “and the beginning of the Aiel journey to the Three-fold Land. … “I saw the Aiel when they were called the Da’shain Aiel, and followed the Way of the Leaf.” …

“Liar!” The canyon’s shape carried Couladin’s bellow, wrath mixed with triumph over the shouts of the gathering. … “He proves himself a fraud from his own mouth! We have always been warriors! Always! To the beginning of time!”

-- “A Breaking,” The Shadow Rising

Militant fundamentalists, arrogant out-of-touch elites, unhinged narcissist heads of state, religious fanatics, historical revisionists, violent secessionists. If Robert Jordan’s depictions of an apocalyptic age seem prophetic, it’s because he was a lover of history. The Wheel of Time repeats its patterns, and so do world events.