Rajiv’s Threads In the Pattern: Wanda and the Wheel

Comparing WandaVision to The Wheel of Time suggests the ingredients for fandom-level engagement: Hang a lampshade on the mysteries, use each installment to recontextualize the previous, create a story world rich enough for scholarship, and pause between installments to invite fans into the storytelling. (SPOILERS for The Wheel of Time and very minor spoilers for WandaVision.) 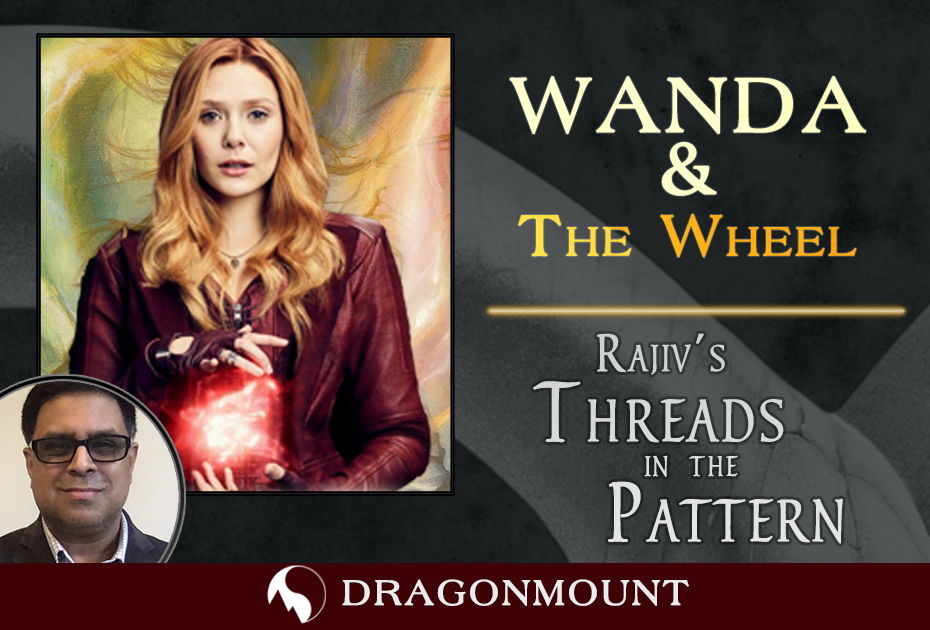 The Disney+ show WandaVision just ended, and I’m coming down from a high. It’s not that the Marvel Studios program paid off its every promise--the high had little to do with the ending at all. WandaVision set up a model of intense engagement that reminded me of some of my favorite stories, including The Wheel of Time.

I watched, re-watched, theorized, discussed, dissected, and thoroughly immersed myself in WandaVision. There are a few story similarities with Robert Jordan’s epic--a history that spans centuries, pocket realities, glimmers of a multiverse, witches with a prejudice against Wilders--but there’s a recipe both tales have in common that fires all my taste buds and draws me in completely, always chasing that next bite.

It goes without saying that a good story, with characters I care about, are prerequisites. But I watched each new episode of WandaVision the way I read each new volume of The Wheel of Time--by revisiting previous installments, asking questions, and speculating what those answers would be. For both I found a community of the like-minded to go deep, to challenge the story and each other. When you do it alone, it’s an obsession; when an entire community does it, it’s a fandom. But what is the recipe that elicits this behavior?

WandaVision started with the question “why did they make a show with two superheroes starring in a Dick Van Dyke/Bewitched remake?” Each episode added layers, until Agent Jimmy Woo helpfully started listing the pertinent questions on a whiteboard. He hung a lampshade on the show as a puzzle box. We should be asking these questions. The show promised answers.

I remember reading the “Dragonmount” prologue in The Eye of the World with the same off-kilter sense of being dropped into something unexpected. It was the aftermath of a cataclysmic war, with a hero taken by madness and a tooth-gnashing villain. They slung around titles and names without explanation, mentioned artifacts like the Ring of Tamyrlin, and then declared that no matter who lived and who died, their battle would rage on until the end of time. It was a lot. Then we got an excerpt from a history, or a prophecy, before we found ourselves in, if not quite the Shire, then a place with enough similarities that we could ground ourselves. Slowly, we found out how Lews Therin Telamon and Elan Morin Tedronai connected to this story, and what it meant for their fight to continue until the end of time.

Questions led to answers, that led to more questions. The Wheel of Time hung its own lampshades using symbolic prophecies, dreams, visions, and foretellings. They were promises about the story. Figuring out how they would be fulfilled (or whether they had already been fulfilled) became an intellectual game to play between books.

In WandaVision, there was an episode that stepped out of the show-within-the-show where it started, to focus on the characters trying to understand the inner show. We watched them react to the scenes we’d already seen, recontextualizing them and inviting us to go back and watch again with our new knowledge. Later, there was an episode that revealed someone pulling strings behind the scenes. Then, yet another episode took us through the parts of the main character’s backstory that informed the show-within-the-show (and its commercials). We saw previous episodes--and even earlier movies in the Marvel Cinematic Universe--in new ways. (Avengers: Age of Ultron and Doctor Strange both became more interesting in light of WandaVision.) Some of us even wondered if movies outside of Marvel Studios were being recontextualized.

I started reading The Wheel of Time when the fourth book, The Shadow Rising, came out. Thereafter, I reread the series before each new book’s release. Robert Jordan rewarded the rereading. He used third-person limited, and confined the early chapters to the perspective of the hicks from the Two Rivers, so what we learned about the world through their eyes was usually wrong, especially when they encountered new cultures, complicated politics, or the metaphysical underpinnings of reality. We realized that Aes Sedai, under their outward serenity, were as uncertain and desperate as everyone else, and not at all monolithic in their motives. We learned that nine of ten parts of folk wisdom about the Dragon, the One Power, and the Forsaken were myth and superstition, and that the nature of the so-called Last Battle was not what we’d believed. And rereading uncovered so much foreshadowing in the most innocuous passages, a reassurance that this story was carefully planned, and paying attention would be rewarded.

What makes this continual recontextualization work, of course, is having a rich and detailed world for the story. WandaVision had the entirety of the Marvel Cinematic Universe as well as the decades of comic books and even a different movie studio’s franchise to draw from. Sometimes that knowledge was a benefit (like knowing who the comic book characters Agatha Harkness and Monica Rambeau were), and sometimes that knowledge led down false paths (the astrophysics engineer and Evan Peters). But it created a “scholarly” space to answer the questions raised by the show, and to understand the meaning of the many details. There was satisfaction in guessing right. And sometimes disgruntlement in being wrong.

Fans of The Wheel of Time are no strangers to a rich story world. While it’s possible to spot inconsistencies, strange one-offs, and missed opportunities, for the most part the Wheel’s cosmology is coherent and even predictive--a hallmark of solid construction. If a technology exists in one place, like a foxhead medallion or an Ogier stedding, it’s likely to be found elsewhere, like a gholam or the city of Far Madding. If there’s a discrepancy in details, like Aes Sedai achieving an ageless look from using the One Power, but not Wise Ones, Windfinders, or damane, there’s probably a discoverable explanation, like the use of the Oath Rod. Healing weaves can be modified to do harm, and Pattern-destroying balefire suggests a Pattern-strengthening Flame of Tar Valon. A trip backwards through the generations of Aiel history not only helps to understand their culture, but the Tuatha’an, the Green Man, the Whitecloaks, Warder cloaks, and even Lanfear’s role in freeing the Dark One. (But yes, I felt miffed that Adeleas’s murderer was not the one who flinched when someone mentioned that a woman could not be brought into a circle against her will, because the Black Ajah know about involuntary rings, after all...) The Wheel of Time lends itself to scholarship--and the wistful sense that if we could apply this much brain power to things that pay the bills, we’d be much better off.

WandaVision released on a weekly cadence. It was not amenable to binge watching, especially for people who wanted to avoid spoilers online. Marvel Studios was excellent about locking down leaks about the show before it aired, which meant that I had a week to think about the latest episode, and speculate about its cliffhangers and mysteries. It turns out that having that time to think is immensely enjoyable and intellectually engaging. Deciphering mysteries, reviewing recontextualized episodes, and the scholarly mining of a rich story world makes engaging with the story an active pursuit, where binge-watching is passive consumption. Given this time, I became a participant in the storytelling, not just a recipient of it. I began writing blog posts to refine my latest theories, and regularly engaged with friends (something I’m normally bad at) to theorize and discuss the pressing matters of the latest episode. It was joyful, and it only happened because I had time between each installment.

The pause between books in The Wheel of Time was much longer than a week, and afforded a similar pleasure. Back then, I found like-minded folks on Usenet, and an old friend and I, who had moved to separate cities, carried on an old-fashioned correspondence about The Wheel of Time. When the last few books came out, we booked hotel rooms between our cities, left our families at home, and went on retreats together, reading a chapter, discussing, and then reading the next. It became a pursuit both intellectual and social, and remains among my fondest memories.

I’m convinced that a story world can appear to be far richer than it actually is, given a dedicated fandom and time. The Star Wars saga built a galaxy by dropping casual mention of events, places, and characters that became fodder for head-canon and volumes of fan fiction, both paid and unpaid. It’s hard to find a corner of the Star Wars universe that hasn’t been thoroughly explored, and even the nonsensical-sounding “made the Kessel Run in less than twelve parsecs” found a canonical explanation. A few details go a long way for pattern-hungry brains.

Inevitably, a story--by definition--comes to an end. Well, this isn’t strictly true for comic books and franchises, but as we know from The Wheel of Time, if it isn’t the ending, then there must be an ending. “Sticking the landing” is a matter of paying off the level of engagement the work elicited. Attention and engagement is currency on credit, and the ending is when the bill comes due. The work doesn’t need to validate every wild theory, but it needs to emphasize which details were important, and how they came together for a surprising-yet-inevitable conclusion. An ending works in competition with each fan’s head-canon. Did WandaVision’s series finale stick the landing? A Memory of Light? The answers will vary, and may even change with time. Both are topics beyond the scope of this discussion, because if anything, the recipe for joyfully obsessive engagement truly is about the journey.


I occasionally write fiction, and though my current discretionary time means it’s short stories, my daydream is to someday write a world that could give readers the sort of joy The Wheel of Time gave me. It’s instructive to draw parallels with other properties that have sparked similar joy, be they epic fantasy series, long-form television shows, movie or comic book franchises, or computer games. It starts with the story, but by no means ends there. The world building must imply so much more beyond the scope of the story. There should be secrets that have a payoff if uncovered by intrepid fan-sleuths. New information should recontextualize what came before. If possible, it should be doled out in doses, feeding the fans without sating them. Create something that’s the fodder for endless daydreams, something that lives on after the last page is turned, or the credits roll.