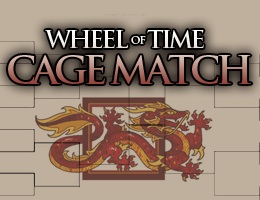 The semi-finals are over and now we're at the Championship! And our fighters are:

Graendal--winner of the Channeler's bracket

If you want to vote in this week's match, go here.

And as a bonus, Dragonmount's own Barid Bel Medar has written an epic match up between Rand and Demandred. Fans waited for this in the series, but were left wanting. So, if you want to vote, or talk about this match, go here.