It appears that we’re going to be getting a lot more Wheel of Time in the future. Amazon has renewed the TV series for a second season and production will commence as soon as production on Season 1 ends. 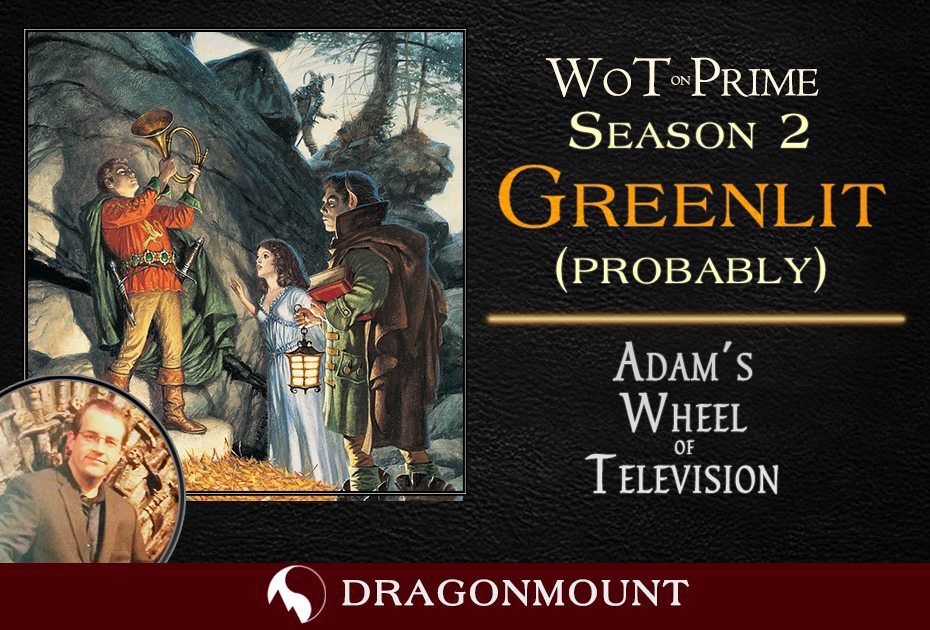 It appears that we’re going to be getting a lot more Wheel of Time in the future. According to industry bible Deadline, Amazon has renewed the TV series for a second season and production will commence as soon as the last scenes for Season 1 are completed in the coming weeks. Like the first season, the second is expected to consist of eight episodes.

We heard a while back that the writers had started work on scripts for the second season, and Amazon traditionally greenlights two seasons before airing the first, often starting shooting the second year before airing a single episode (they did this with The Boys and The Expanse and it sounds like their Lord of the Rings prequel show is going the same way). This way they can air the seasons with just a year’s gap between them, unlike competitors Netflix and HBO who frequently have 18-24 month gaps between seasons. However, with Wheel of Time they never formally announced a Season 2 greenlight, leading some to believe they were taking a different approach with this show.

Whatever the original plan was, it was derailed – as with so much else – by the COVID19 pandemic. Season 1’s original eight-month shooting schedule has been dramatically extended to at least twenty-one months due to two shutdowns caused by the coronavirus. Six episodes were completed in the first batch of filming and most of the last two were completed in the second, but several scenes were left unfinished. Fortunately, the cast and crew recently regrouped in the Czech Republic and shooting is now reportedly underway on the last few scenes. Taking Deadline’s statement literally, they could potentially roll into shooting Season 2 as soon as this month or next. This means that, hopefully, in the coming weeks we should start hearing about cast and crew hirings for the second year.

Of course, it would help if we knew what was going to happen in the second season. Season 1 is predominantly based on The Eye of the World, the first book in The Wheel of Time, though it will also incorporate some original storylines and characters from the prequel novel New Spring (widespread reports that Season 1 will adapt the first two books in the season have proven erroneous, based on the known filming locations and casting for the first season). Season 2, logically, should be mainly based on The Great Hunt. However, The Wheel of Time consists of fourteen novels and the TV show is very clearly not going to last for fourteen seasons, so a degree of compression for future seasons is to be expected. Season 2 could well incorporate more material from the third book in the series, The Dragon Reborn, or take a different tack.

We know from showrunner Rafe Judkins that the show will feature the Seanchan (allaying some fears they’d be cut altogether), so it’s possible in the second season we’ll meet characters like the High Lord Turak, Lady Suroth and ship captain Egeanin. If Book 1 characters did not appear in Season 1, it’s possible they’ll appear instead in Season 2, and characters in this bracket could include Elayne, Galad, Gawyn, Bayle Domon and Elaida. Other characters fans might be keeping their eyes open for include Lord Ingtar, Hurin the sniffer, King Galldrian, Lord Barthanes, the redoubtable Child of the Light Jaichim Carridin, and Selene, the noble lady who is more than she appears. There’s also the fan-favourites, the Fal Dara squad of soldiers including Ragan and Uno (and the less-popular Masema). Fans may also be keen to get their first glimpses of the Seanchan exotic creatures (like grolm and raken), which could be a fresh challenge for the CGI team.

Let us know what Season 2 elements you’re looking forwards to, and we’ll have to see what news breaks in the next few weeks. In the meantime, keep an eye on Dragonmount’s news page and casting page for the latest developments.