A Message from Wilson Grooms 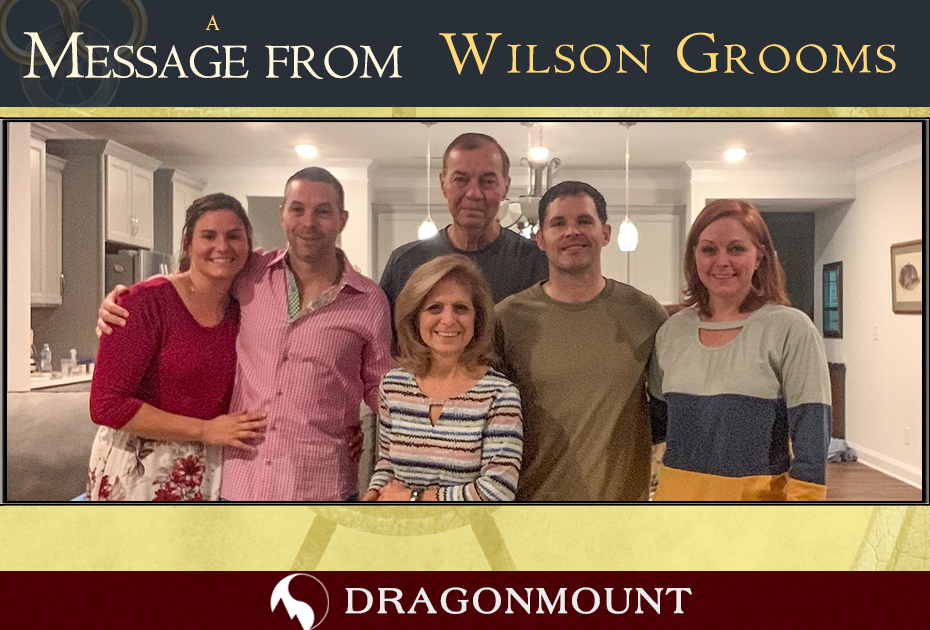 The following is a message from Wilson Grooms, Robert Jordan's cousin ("Brother/Cousin"). For those unfamiliar with Wilson, he plays an essential role in the family, most especially back in 2007 when he provided regular updates to fans regarding Robert Jordan's illness.

This tale began almost a year ago, thinking I might have a sinus issue. Wrong!  It took a while, but in February of 2020 it was determined that I have a cancer on the extreme rear of my tongue.  The cause, HPV, Human Papilloma Virus. You see Television ads urging you to get your kids inoculated against this. Do it please. There was no such vaccine back in the day.

The cancer was a squamous cell.  Doctors called it a “garden variety” and were all confident that with radiation and chemo they could render me cancer free. For the next seven weeks our daughter Marisa picked me up at 8 am Monday through Friday for radiation.  Chemotherapy was once a week for the same seven weeks. The doctors were honest that the treatments are intense. The last two weeks of treatments and the first two weeks of “healing” I spent curled up in a ball.

We had to wait months to repeat the tests that would let us know whether the bad actor had be eradicated. Waiting isn’t my strong suit.

In late August a PET scan indicated “something” was still there. Doctors were divided as to what it was. It could be residual cancer.  Most thought it to be inflammation as part of the healing process. But I wasn’t feeling better. In fact I had been suffering intense headaches which began in late June. The site was visually scoped (also not fun) frequently to monitor any changes. Nothing. So in November we repeated the biopsy.

It’s still there. Worse, it has compromised my tongue and larynx. And it has mutated. It is now a very rare and aggressive Sarcomatoid spindle cell tumor.  The only option offered was a drastic surgery to remove all the tongue and voice box. Before making that life altering decision a full Tumor Board of specialists reviewed my case.

Because of the type of cancer it has become, the drastic surgery proposed by my Surgical Oncologist is no longer a viable option.  Surgery would make day to day life difficult, would not reduce the pain I am dealing with and would not extend life.  Studies show that with a sarcomatoid cancer and this surgery, patients do not live beyond 12 months. And a painful 12 months at that.

The treatment deemed to give me the best chance is chemotherapy combined with immunotherapy. I will have my first infusion on the 30th of November. The regime is two weeks on, one week off for as long as the treatments are working. I am not certain as of now how often I will be taking the immunotherapy drug.

This specific treatment for this type of cancer has been only used for about four years. There are patients who were in the study when it began and are still doing well. Thus it has not been determined what an average life expectancy may be. If my cancer does not respond, I am looking at six months to perhaps a year. Please pray that I see positive results. Even if results are positive, this cancer will never be eradicated by the treatments.  The best I can hope for is that it goes into remission and that the treatments keep it there. But if God wants to work a miracle, I’m okay with that too. I know it’s selfish, but that’s what I pray for.

I ask for your prayers for my family that they have the strength to help me in this fight.

This is being posted by my daughter/cousin Melanie Murray. I have asked her to be my point of contact. I ask you please, do not contact any other family members. Melanie will post any updates as needed. But remember, no news is wonderful news.

Every day is a blessing. Make sure that those who are important in your life know it. Tell them. And set goals. One of mine is that I plan to see all of you at JordanCon in April. In lieu of that, I hope God will excuse Jim, aka RJ, of his storytelling duties so that we can go fishing.