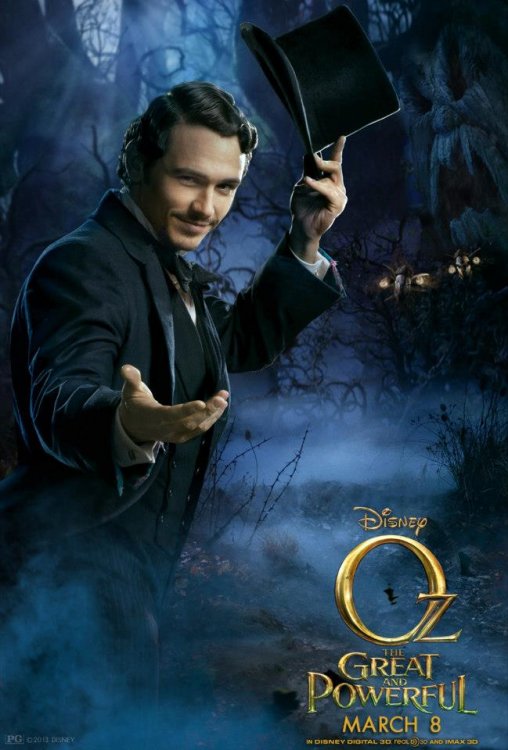 This Friday, March 9th, my most anticipated movie of the year opens: "Oz The Great & Powerful", from Sam Raimi (Spiderman, Evil Dead) and Disney. It is the first big-budget Oz movie since 1985's "Return To Oz", which was also a Disney picture. RTO was unappreciated in its time but has gone on to be considered a fantasy classic (as directed by Walter Murch) and one of the finest adaptations of the original L. Frank Baum books.

I am a life-long Oz/Baum fan and have been waiting for another big budget, faithful Oz movie since '85. At first I was skeptical about this project; but from everything I've heard, this looks like a very respectful take on Baum's great fantasy world (my personal favorite).

One of the things I love about WOT is that it is like Oz in many ways: it is distinctly American in tone and style; female characters (both unusual and archetypal) feature prominently (unlike most fantasy); there are classic fairy-tale elements like the Ogiers and their world, and the creatures ridden by the Seanchan; and like Baum, RJ mingles magic with technology.

I can't help but look back to the release of "Alice In Wonderland" (2009, Tim Burton) also a Disney feature. I loved "Alice" as a work of visual art, and as an entertaining film, but the script was lacking; I am glad to see that "Oz" runs 130 minutes, which indicates a more fully developed screenplay. Anyway, the buzz for "Alice" started a full year before release, and despite lack-luster reviews, it went on to break box office records and to be embraced by a global audience.

But "Oz" has never been as popular as "Wonderland". More on that in a bit. I have already noticed industry bloggers/journos sharpening their knives, predicting a "John Carter" (my favorite film of 2012) sized disaster. Why? I think it comes mostly from a misguided devotion to the great 1939 MGM film we all know and love. There is a flat refusal to read the Baum books or think of Oz as we think of Middle Earth, Hogwarts or Narnia: unique literary creations. Oz is: Judy Garland, green faced witches with zingy one-liners, musical numbers and early technicolor. It is not allowed to be anything else. For us die-hard Baum Fans, this is disheartening. So, while "Alice" was greeted with eager smiles and open arms, "Oz" is being greeted with skepticism and lack of interest. I think that's sad.

To begin with, there are no characters in Lewis Carroll's "Alice" books, only caricatures. There is no story, no plot, and no drama. No one reads those books, if they did they would discover something extremely hard to enjoy on first encounter. I love Lewis Carroll and am a life-long fan. But the "Alice" books require annotation in order to get any of their humor - almost every gag is based in the everyday life of a middle-class Victorian child. Once you learn all this stuff, the satire is wonderful, brilliant. But you cannot simply pick up those books and enjoy them as stories. Over the years "Alice" has become associated with the underground and the counter culture. This began in the late 19th Century and continues to our day. "Alice" + Tim Burton promises something edgy, dark, iconoclastic. Burton kind-of delivered on that "promise", but the audience was already primed to love Alice and whatever adventures she was put in, as long as they involved Mad Hatters, White Rabbits, hooka smoking Caterpillars, and Red Queens screaming for heads to be lopped off.

Oz, on the other hand, has memorable characters (even ones most people have never heard of!), and wonderfully inventive plots often centered around very moving stories. But for some reason, people think that Oz should be more like Wonderland, that it is somehow missing the edge, the darkness, that make Wonderland so intriguing. I don't think Oz lacks for a little edgy darkness in many places; but it is of a different time and place. Alice comes from the claustrophobic, cloistered world of Victorian England. Oz was born of turn-of-the-century American optimism, it looks forward to a world where anything is possible, from air-travel (by bubble!) to robotics (Tik-Tok), artificial prosthesis (Tin-Man), and gender equality!

I hope "Oz" does as well as "Alice" did in 2009 and that a whole new generation will discover L. Frank Baum's wonderful American mythology.

WOT: Finished TGH!!! Need to absorb it before blogging. Am taking a short break before starting TDR. Overall impression: I am hooked!

NEWS! The publication date for my book (Carrot Field) is set (I'll announce it as it gets nearer). Work on the book cover (which I am art directing) has begun, I will have a concept drawing soon - it is looking absolutely spectacular, I believe the complete panoramic cover will be iconic. I received the Line Edit this week and am working on that; it's a good edit, I'm enjoying working on it. Apart from all that, web promotion will begin soon, along with a hundred other related details. I am also working on a new novel; but more on that in coming months...