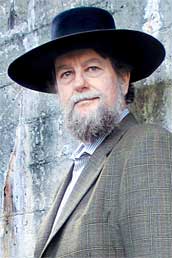 I first encountered Robert Jordan in the mid 1980's. Both me and my older brother were obsessed with Conan. We read the comics, collected the "Ace" paperbacks, and spent endless hours debating RE Howard's mythology, drawing maps, and reading history to bolster our knowledge of Conan's world. We were intent on outdoing each other in the Conan-knowledge stakes. We were both wary when we discovered a series of orginal Conan novels, written by some author we had never heard of, "Robert Jordan". We were the kind of fans who believed that all those Lin Carter/L. Sprague DeCamp stories really were based on RE Howard outlines, ha ha! But we gave theRJ's a try and were both instant fans.

Come the late 80's, we were both intrigued by the rumors of a major fantasy epic written by RJ. When EOTW finally came out, I was the one who bought it and read it. I remember liking it alot, but it was at the tail end of my first wave of sf-f fandom. I was mostly reading poetry, religious philosophy, Russian and English novels & Medieval literature. I had discovered T.S. Eliot, James Joyce and W.B. Yeats. My tastes were changing. So I never followed up.

But my brother did. On my recommendation he read EOTW and continued on through the next 4 volumes. He was the first person I heard express "WOT Fatigue". Once he put it down, he had nothing good to say about the series. I was nonplussed - it couldn't have gotten that bad, could it? But time had moved on. I started to think that maybe those Conan novels weren't so hot after all, and maybe RJ was just another journeyman genre writer cranking out long books for a devoted fanbase. That's what you mostly saw in the genre, so it made sense.

And yet...every time a WOT book came out, I was intrigued. I would flip open the book, fall on a passage, determine the writing to be "bad" and shove the book back in frustration. Maybe I was randomly falling on weak passages, I don't know. But for some reason my curiosity about the series remained. Eventually, I got on the 'net, and I was fascinated by WOTmania, which seemed like some kind of group therapy session. There were dire warnings to the uninitiated about not getting "addicted". There were massive flame wars between true believers and fallen heretics. Eventually, RJ emerged on the 'net, and he seemed like a really nice guy, and highly intelligent.

Around 2006, my nephew discovered my brother's dog-eared paperback editions of the first four WOT volumes. He got into the series - Big Time. He kept telling me that I would "appreciate" the books. "These aren't the usual fantasy stuff," he'd tell me, "it's something you would really appreciate." Then came RJ's death. I remembered how much I had enjoyed his Conan novels as a kid, how much I had enjoyed EOTW in 1990. I was saddened by the news.

One day I was in NYC, killing some time at the Borders next to Penn Station. I knew all about the 1500+ 1 star reviews for COT. I saw the big fat paperback with its lovely DKS cover staring at me. I took the book down, sat down with it, and started reading the Prologue. I had no idea who the characters were, what the situation was, or what part of the gargantuan story I was in, but I couldn't put the book down. It was absolutely gripping. The writing was strong and fluent. I felt as if I'd entered another world. I read the whole prologue, then opened the book randomly to a scene. Again, I was hooked, and the writing was first rate. I found another scene. Same thing happened. I read a whole chapter, randomly selected. About two hours had passed and I realized that I was in danger of reading all of Volume 10, out of sequence! "If that's a bad novel, I don't know anything about writing!" I thought.

Things got busy, things went wrong, some time passed. Finally, summer of 2010, I decided to start the series. I read New Spring, and loved it. I re-read EOTW and started to get really excited. I started TGH, got stalled 1/3 through, and picked it up again this past December (2012). I hit Chapter 22 (where Lan and Moiraine discuss how they first met) and thought, "This is truly great novel writing!"

Since then, I have become a die-hard RJ fan. I am 2/3 thru TGH. This isn't about world building, fantasy stories, or getting to the end of the story for me. I have discovered a truly great novelist. I'm excited! And it's in my favorite genre, SF-F. A towering achievement, sadly not completed by the original author. But many ancient and Medieval classics were completed by different authors than the ones who started them. Even Shakespeare had collaborators! 11/14ths of the epic was written by one man, and the entire story is his.

This is all happening as my first novel, which took 20 years to finally complete & publish, is about to be released. I wonder if it will ever inspire the passion that WOT has, if it will still be in print 20 years on, if anyone will care. I take RJ as an inspiration, and it gives me hope.